Protesters gathered in Baku, Azerbaijan today (Saturday 6-17) to protest against the violence in neighboring Iran. Scores of Azeris were killed and hundreds arrested during protests that erupted in Tabriz after an Iranian newspaper printed an offensive cartoon in May.

And,for the second time in as many World Cup games hundreds of demonstrators gathered in Germany to protest the Iranian regime’s threats against Israel. 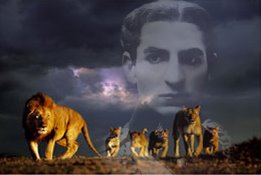 And earlier this week, clashes broke out in several Iranian cities following the soccer team’s play at the World Cup where the players noticeably snubbed the regime:

Angry supporters expressed their hostility, against the Islamic regime and in cities, such as, Tehran, Ahvaz, Shiraz and Esfahan. Several were injured or arrested by the Islamic regime’s security forces and plainclothes men.

Many Iranians had gathered with the hope of seeing Iran’s victory, especially, after witnessing Iran’s net dominance of Mexico, during the first half time. But the anger arised after the astonishing and sudden mediocre game played, by Iran’s National Team, during the second half time and immediately following the return of the players to the field.

Already many Iranians were speaking about the way that most members of the Iranian team had refused to chant the mandatory Islamic republic anthem, which was very noticeable during the televised transmission. Many were already speaking about the repressive consequences for these maverick players and how their refusal had put more shame on the theocratic regime, at a time that it needed to show as much support as possible for its illegitimate rule.

Russia and China got a warning to not support Iran by giving them what their sign refers to as a ‘dirty nuke’, on the Arc de Triomphe in Paris Wednesday, June 13, 2006. (AP) 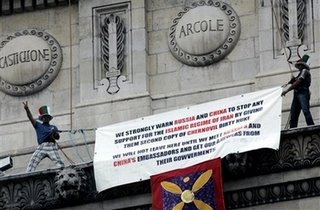 Sarbazekuchak sent news about an Iranian protest from above the Arc de Triomphe in Paris.

In words similar to those of famed Soviet dissident Natan Sharansky, Winston posts a reminder on how ripe the people of Iran are for revolution:

It is true that post 1979 revolution is run by maniacs and mad mullahs but this doesn’t change the fact that the people of Iran have always been peaceful, friendly and hospitable and they love foreigners especially if they are from a western country like America.

That is also true that the Islamic regime of Iran today is doing every imaginable stuff in the name of the Iranian people which is why they are hated by majority of Iranians, but it doesn’t authorize us to call the people of that country names they don’t really deserve. Remember that our enemy is the regime of Iran, not those who are taken hostage by the regime and suffering on a daily basis.

Labor protests have been ongoing in the western Iranian city of Zanjan this past week against discriminatory policies imposed at a local factory.

Stefania has a huge roundup on the protests outside of today’s Iran-Portugal World Cup match at Publius Pundit.

Sugiero points out some World Cup misconceptions by Dutch Islamists.