Sadly, only the 7 Amnesty International activists but not one supporter showed up to protest George W. Bush in Budapest, Hungary, yesterday.

But that didn’t stop the AP from preaching to the masses. 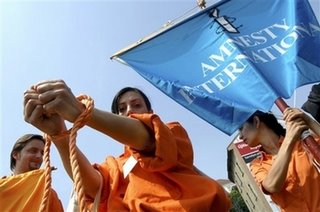 Activists of human rights organization Amnesty International dressed up as Guantanamo detainees protest against the United States’ foreign policy in downtown Budapest, Hungary, on Thursday, June 22, 2006 during the visit of U.S. President George W. Bush. Bush, on a visit to celebrate the 50th anniversary of Hungary’s bloody revolt against communist rule in this central Europe nation, was urged on Thursday to make sure the U.S. fight against terrorism doesn’t stomp on human rights. (AP Photo/Bela Szandelszky)

Publius has this priceless report from Hungarian blogger Pesticide:

A big shout out to reader J. for sending us the subscription only MTI story about yesterday’s demonstration organized by Amnesty International Hungary to protest alleged abuses of suspects in the “war on terror.” (Wait – we forgot – is it editorializing to put “war on terror” in quotes, and if you don’t are you supposed to put it in capitals?) According to the report, seven Amnesty activists and several reporters were on hand for the demo, but “not one supporter showed up to participate.” Maybe they were all in Guantanamo!

It’s lonely out there for the hooded professional Gitmo protesters from Amnesty International. 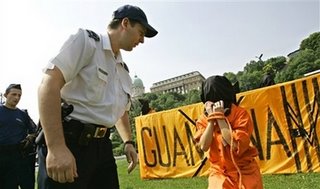 A police officer asks an activist of human rights organization Amnesty International dressed up as a Guantanamo detainee to protest gainst the visit of U.S. President George W. Bush, to leave the place in downtown Budapest, Hungary, Thursday, June 22, 2006. (AP)

While we’re on the subject of prisoners… We’re still waiting for Amnesty International to organize a protest against the gruesome slaughter and torture of American Military prisoners.

For more on President Bush’s wonderful and historic speech in Budapest check out Elephants in Academia or for a look at the courageous 1956 Hungarian democratic uprising check out Publius Pundit.