And, like the students 17 years earlier who were massacred in Tiananmen Square by government forces, today’s protesters are still hoping for democratic reform in China. 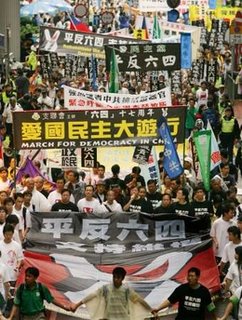 Hundreds of pro-democracy demonstrators stage a protest march, to mark the 17th anniversary of the army crackdown on student-led demonstrations for democracy centred on Beijing’s Tiananmen Square, in Hong Kong May 28, 2006. The words on the banners reads ‘Peaceful demonstrations against June 4th’. (REUTERS/Bobby Yip)

The US is urging China to re-evaluate its actions on the 17th anniversary of the Tiananmen Square crackdown.

The highest ranking official of the Catholic Church in China is criticizing the communist government and urging a full review of the killings 17 years ago. 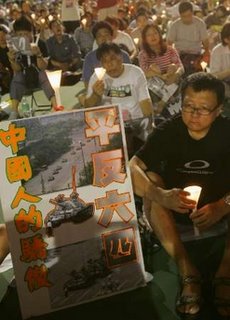 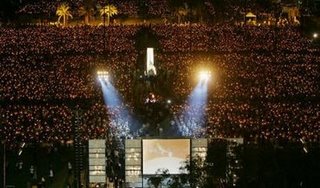 Thousands of protesters take part in a candlelight vigil to mark the 17th anniversary of the military crackdown on pro-democracy movement in Beijing’s Tiananmen Square in 1989, at Hong Kong’s Victoria Park, June 4 2006. (REUTERS/Bobby Yip)

Publius Pundit has more on the anniversary of this massacre.

Global Voices has a roundup of blogger reaction today.