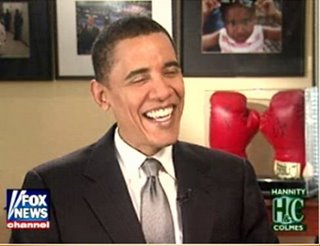 …Illinois Senator Barak Obama says that John Murtha is “someone who knows of which he speaks!”

Alan Colmes: When Jack Murtha talks about civilians being killed in cold blood by troops, is that hurtful to the Democratic Party? Is that rhetoric difficult for you to embrace or do you think he’s actually helping again in the terms of checks and balances(?) on what the Administration and even the what the troops might be doing?

Barak Obama: Well, look I think it’s very important where we consider situations like Haditha to understand that you’ve got 99.9% of American troops who are doing outstanding work under the worst conditions imaginable. That a lot of the problems that we are starting to see arises from troops who have been there for three or four rotations without a clear mission, in a situation where the problems are really more political than they are military (Murtha line). And, you can’t distinguish between civilians and insurgents in a lot of situations. It’s very important for us to understand every time I go to Iraq to see what an outstanding job our troops are doing as a whole.

Colmes: Did Murtha say that in the right way?

Obama: You know, I don’t have the exact quotes in front of me. What I know is here is a guy who served our country. I would never second guess John Murtha… I think he’s somebody who knows of which he speaks.

Remember, when you hear Obama agree with Murtha’s “cold blooded murder” accusations against US troops, that today this is the “moderate” voice of the Democratic Party!

And, also, please don’t forget that… Democrats support the troops!