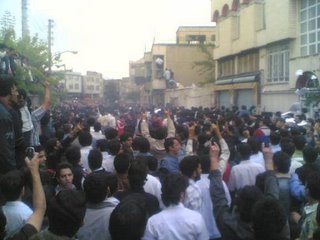 Winston posted this protest picture and several more taken in the city of Orumiye in the northwest province of West Azarbaijan in Iran.

Pan Armenian News is one source reporting a slaughter of Azeri protesters in Tehran:

The elemental rally of South Azerbaijanis next to the Iranian Parliament building on May 28 was suppressed with special cruelty. Iranian authorities used (Yegani Bizhe) the Special Punitive Guard, which opened fire to suppress manifestations of Azerbaijanis, says a statement of the Committee for Protection of Rights of South Azerbaijan. The message says that during mass protest in Iran 50 Azeris were killed, 600 were wounded, over 1000 are arrested.

Iranian authorities used force against peaceful rally participants in Tabriz, Teheran, Urmia, Parsabad, Meshkina, Sulduz. The rally of Azeris scheduled in Tabriz May 28 was drowned in blood. In spite of all this, this wave of national awakening of Azerbaijanis will be included in the history of Azerbaijan, says the statement, reports Day.az.

Roos Online is reporting on mass arrests of student protesters. 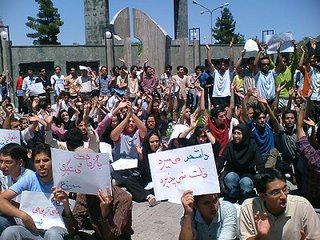 Stefania has pictures from protesting at Amir Kabir University in Tehran.

The Iranian Turkmens Society issued a statement today is support of the Azeris protesters in Iran:

The Iranian Turkmens consider the insult to the Azeri people as done to them, the Turkmensahra Liberation Organization told APA. The statement reads that the caricature published on the Iran Daily, which is insulting the entire Azeri nation, has been purposefully prepared.

“As a matter of fact, the expressions in the article display the viewpoint of the chauvinistic Farsi dominance in Iran towards the Turks. Farsi chauvinists try everything possible to prevent the Iranian Turks learn and use their native tongue. However, these fools fail to realize that the policy of assimilation against people has long been defeated in Iran and ethnic groups have been trying to preserve their customs, languages and cultures more than ever. People have realized that Farsi chauvinism is behind these propaganda activities against religion and sects, and that their sole purpose is to wipe out their ethnic cultures and languages. Today, the developments in different parts of Iran indicate that ethnic groups are now ready to defend their identities, honors and the heritage of their ancestors,” the statement reads.

The Turkmensahra Liberation Organization also states that mass protests staged by Azerbaijanis in Iran are not a temporary and spontaneous incident, triggered by the insults of a newspaper.

Further, the Iranian Regime gets a firm warning from the Turkmens:

We warn the dominant Farsi regime that as long as they maintain cultural assimilation, oppression and forceful confiscation of people’s fatherland, they will encounter with uncontrollable events of much greater scale in Turkmensahra soon as it was the case in history,” the statement concludes.

Local sources in northwest Iran report that the slogans seen on the display banners were unprecedented during the past quarter century! 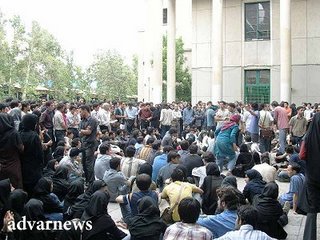 Advar posted this picture from one of the student protests in Tehran this past week.

Representatives of Iranian ethnic groups met in Washington DC yesterday to ask for support to oust the existing regime and bring stability to the region:

Gathering in Washington, representatives from four large Iranian minority groups urged the United States and the Western world to help them overthrow the Islamic regime in Tehran.

“The peaceful removal of this regime, which is the world’s strongest supporter of terrorism, will help to stabilize the region, particularly in Iraq,” said Mustafa Hejri, secretary-general of the Kurdish Democratic Party of Iran (IKDP), one of the groupstaking part in a conference here.

Also, news has spread that a prominent blogger and student protester, Abed Tavancheh, has been missing in Tehran since Friday.

Alexandra has more on these Iranian protests.

The mainstream media may be ignoring this news but Cox & Forkum did not.