The Democratic White House Gagglers will have to work harder at attacking Tony Snow. 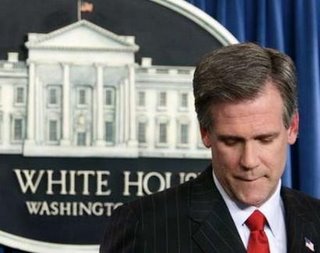 New White House Press Secretary Tony Snow pauses as he recounts his bout with cancer during his first on-camera briefing in Washington May 16, 2006. Snow replaced Scott McClellan, who resigned after a shake up of U.S. President George W. Bush’s senior aides. (REUTERS/Jim Young)

Q Helen Thomas: The President today denied he’d ever broken the law in terms of wiretaps. He also indicated that anything that was looked into, any calls, had some sort of foreign aspect either to or from. And he has said he’s always obeyed the law. Are all of these stories untrue that we’ve been reading for the last several days that millions of Americans have been wiretapped?

Q Helen Thomas: Are the phone calls turned over to the government?

MR. SNOW: Okay, let’s try to segregate the stories here. What he’s said about the terror surveillance program is that these are foreign-to-domestic calls and they were all done within the parameters of the law. He has not commented on the —

Q Helen Thomas: He, himself, has said he didn’t obey that law.

MR. SNOW: No, he didn’t. What he said is that he has done everything within the confines of the law. The second thing is, you’re mentioning a USA Today story about which this administration has no comment. But I would direct you back to the USA Today story itself, and if you analyze what that story said, what did it say? It said there is no wiretapping of individual calls, there is no personal information that is being relayed. There is no name, there is no address, there is no consequence of the calls, there’s no description of who the party on the other end is.

Q Helen Thomas: Privacy was breached by turning over their phone numbers.

MR. SNOW: Well, again, you are jumping to conclusions about a program, the existence of which we will neither confirm, nor deny.

Q Helen Thomas: Why? Don’t you think the American people have a right to know —

MR. SNOW: Because — what’s interesting is, there seems to be a notion that because the President has talked a little bit about one surveillance program and one matter of intelligence gathering, that somehow we have to tell the entire world we have to make intelligence gathering transparent. Let me remind you, it’s a war on terror, and there are people — I guarantee you, al Qaeda does not believe —

Q Helen Thomas: He doesn’t have a right to break the law, does he?

MR. SNOW: No, the President is not talking about breaking the law. But al Qaeda doesn’t believe in transparency. What al Qaeda believes in is mayhem, and the President has a constitutional obligation and a heartfelt determination to make sure we fight it.

MR. SNOW: Absolutely right, and he believes in obeying it.

Hot Air has the video.

The Anchoress sums it up.