Four are dead from weekend protest violence in northwest Iran. Authorities called in the “Yegane Bizhe” special guard, which differs from other troops because of the cruelty it uses to suppress demonstrators… 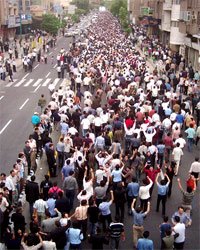 But, still the protests continue!

SHAME ON THE WESTERN MEDIA! When 200 Islamist thugs are bused in from across the country by the Islamic Republic to hold a rally outside the Danish Embassy the western news medias (BBC, CNN, AFP, Reuters…) are quick to cover the story live on TV making it seem like Iranians are crazy fanatics!

When tens of thousands of Iranians come out denouncing that very same regime that is doing these kind of acts, condemning them for the oppressive rule!!! EVERYTHING GOES SILENT!

Aryamehr at The Spirit of Man 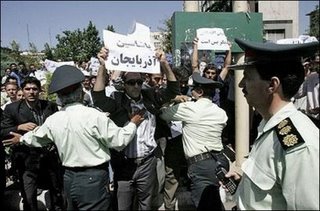 Iranian policemen try to disperse Azeri demonstrators holding up Farsi banners that read “Long live Azerbaijan” outside the culture ministry in Tehran. Four people have been killed and 43 others injured in northwest Iran during protests. (AFP)

Reports from Iran claim that thousands of Azeris are leaving the northwest for the capital to protest against the regime:

According to information from Iran, thousands of Azeri speaking people have left their homes in northwestern and western Iran to go for a mass protest in front of the clerical regime’s parliament in Tehran.

This is happening as widespread anti-regime protests continue in Azeri speaking provinces in Iran. Some estimates put the figure over 10,000 who are on their way to Tehran.

In the meantime several hundred Azeri speaking students from universities in Tehran tried to stage a protest outside the mullahs’ parliament today but they were stopped by security forces. Students were chanted anti-regime slogans.

The Revolutionary Guard was dispatched to Naqadeh to squelch the protests there that have continued for a week:

Yesterday (Sunday), in a meeting with the regime’s Majlis (Parliament) Speaker and a number of deputies, the mullahs’ Supreme Leader Ali Khamenei described the Azeri speaking Iranians as enemies who are after “inciting tension and instigating ethnic provocations against the state.”

Khamenei called hundreds of thousands of Azeris in northwestern provinces who had protested against discrimination, suppression and insults as mercenaries who had received a “sum” in order to overthrow the regime. He stressed the need for stepped-up repression to confront the explosive state of society.

At the same time, the mullahs’ regime dispatched Revolutionary Guards’ Special Commando units from Khuzistan Province to Naqadeh. The units arrived equipped with light and medium caliber weaponry and took position in the city’s squares and streets.

Despite these measures, the shops stayed closed and both the Azeri and Kurdish residents remained united in their resistance to the suppressive forces.

Reporters Without Borders is pressuring the regime to release two Azeri journalists arrested during protests in northwest Iran :

Reporters Without Borders today called for the “immediate release” of two Azeri journalists, Amin Movahedi, who was detained yesterday in the northern city of Meshkinshar, and Orouj Amiri, detained the day before in the nearby city of Marannd. Their arrests follow demonstrations by members of Iran’s Azeri ethnic minority against the Tehran government.

“Absolutely no charges have been brought against Movahedi and Amiri and the authorities have not said where they are being held,” the press freedom said. “These journalists are being subjected to illegal harassment simply for working independently.” 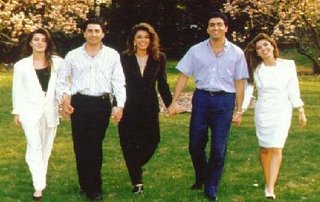 Princess Farahnaz (center) is seen with Princess Leila and Prince Ali-Reza Pahlavi (on left) and Reza Pahlavi II and his wife Yasmine (on right).

Winston sends this news from Reuters:

“Fantastic, we love to hear that, motherhood and apple pie,” Pahlavi said of Bush’s statements that the United States supports a free, democratic Iran.

“What remains to be seen again is in what concrete way the U.S. administration will take the necessary steps,” Pahlavi told Reuters in an interview at his home in a suburb of Washington, flanked by the Iranian flag and portraits of his mother and father, the U.S.-backed monarch who was deposed in the 1979 Islamic revolution.

The United States and other nations should actively support Iran’s dissident groups and give them the technical gear and expertise to get their message out, Pahlavi said.

Pahlavi said regime change in Iran will leave the Middle East a safer place, and said that Iran’s clerics have long been a prime mover behind violence in Iraq, Lebanon and Sudan.

Winston also has posted more pictures emailed to him from the university protests and says the demonstrations are spreading!

The Christian Science Monitor says this latest round of ethnic tension could crack Iran.

The Azeri protesters were attacked by regime commandos backed by Hezbollah thugs:

In Tabriz, were the anti-cartoon protests had turned into anti Government demonstrations, authorities banned all gatherings, but eyewitnesses said in violent clashes between angry mobs and the anti-riot units backed by Hezbollah militias, at least four people were killed.

** Iranian Woman reports that Iranian security forces have fired on demonstrators in Ardebil, Naqadeh, and Meshkin-Shahr. At lest 4 are dead, dozens of others were hurt and hundreds were arre
sted.
** Pajamas Media has a huge roundup and updates with lots of links to the latest protest news.
** The Spirit of Man shows hundreds if not thousands of protesting students against the regime in Tehran.
** Aryamehr is posting pictures and video clips from the protests last week.
** Lori Byrd at Wizbang offers some history.