By the look of the mass protests and ethnic violence throughout the country, it doesn’t look like the US will have to! 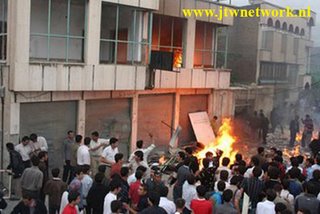 J.T.W. Network has several pictures from the massive and violent protests against the regime from northwest Iran this past week.

Even the capital of Tehran is seeing protests against the regime! 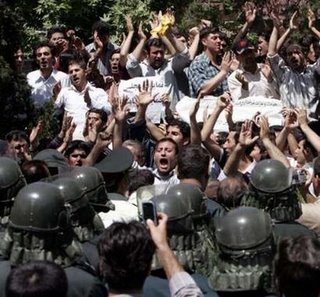 Iranian-Azeris attend a another demonstration as anti-riot police officers try to control them in front of Iran’s Parliament in Tehran on Sunday, May 28, 2006. (AP Photo/ISNA, Amir Kholoosi)

Iranian Woman says- “Wake up and smell the gunpowder!”

The Supreme Leader of Iran warned on Sunday that the US will fail to promote ethnic strife:

Iran’s supreme leader said Sunday the United States would fail to provoke ethnic strife in the Islamic republic after several days of protests over a cartoon that insulted the country’s largest minority.

Ayatollah Ali Khamenei also said in a speech broadcast by state-run television that “trying to provoke ethnic and religious unrest is the last desperate shot by enemies.”

…Ayatollah Ali Khamenei also said in a speech broadcast by state-run television that “trying to provoke ethnic and religious unrest is the last desperate shot by enemies.”

** But, the US does not have to “Provoke Ethnic Strife” since it is already happening!

The government is firing on protesters in the northwest!
Reports from the cities of Ardebil, Naqadeh and Meshkin Shahr say Iranian security forces fired on demonstrators, killing at least five people. 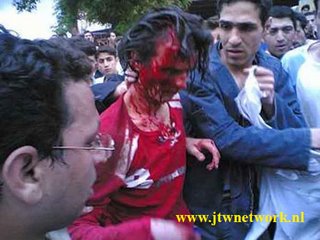 * Aryamehr has video not seen in the mainstream news of a union leader speaking up against the Iranian Regime in the Tabriz protests. *
Hat Tip Papa Ray

Reports earlier in the week put the death toll in Tabriz at 20.

**In southeastern Sistan and Balochistan Provinces:

For Ahmadinejad, Aryamehr reports, the southeastern province of Sistan and Balochistan, a vast region of mountains and deserts bordering Pakistan and Afghanistan is a no-go zone.

The Islamic Republic has intensified its military campaign in Sistan and Baloochistan Province of Iran agains the oppressed Balooch people of this region, who in recent weeks have increased their resistance against the Islamic Republic.

From the Arab News:

Some Kurdish opposition groups, including an outfit known as Pejak and an older Communist group known as Komaleh have already embarked on a guerrilla campaign against the Islamic regime. Both groups maintain bases inside the autonomous Kurdish region of Iraq, and are believed to have ties with the Kurdish Workers Party (PKK), a guerrilla movement fighting Turkey.

However, what worries Tehran most is the rising tide of protest by unarmed populations in some Kurdish cities.

During the past six months at least 30 people have been killed by the security forces during anti-regime demonstrations in various Kurdish cities.

Another province that faces increasing unrest is Khuzestan that produces almost 80 percent of Iran’s oil. The province is home to most of Iran’s estimated 3.2 million ethnic Arabs. Although ethnic Arabs account for fewer than 40 percent of the province’s population, there are districts, such as Dasht Mishan and Susangerd, where they represent up to 80 percent.

The university student protests continue despite the media blackout… 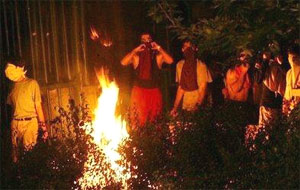 Students torch their dormitories in university protests earlier this week.

The student protesters in Tehran today expressed their solidarity with the Azeri people’s uprising:

In solidarity with the uprising in western and northwestern Iranian provinces against the clerical regime, students in Tehran University abandoned their lessons and held rallies, demonstrations and protest gatherings in the past few days.

Many covering their faces carried banners which read “death to dictator” and chanted anti-regime slogans.

Sugiero has disturbing news from Iran.

Pajamas Media has much more with links to other Iranian protest news.
John Stephenson says the mullah’s propaganda war is heating up.
The Spirit of Man has several links to the protests.