This just can’t help the Democrats with their “Real Security Plan”… They still have that plan, don’t they?… when the world’s leading terror supporting mullacracy is repeating the same arguments your members have been shrieking for years. 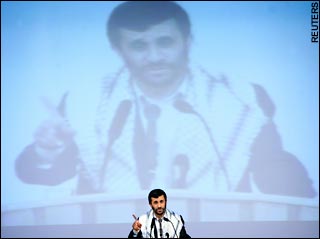 Iranian Leader Mahmoud Ahmadinejad sounded freakishly like an antiwar Democratic Party member in his letter to President Bush. Here is what the spokesman for the mullahs had to say to President Bush according to media reports this morning:

* Did we manage to bring peace, security and prosperity for the people or insecurity and unemployment?

* Did we defend the rights of all people around the world or impose wars on them?

* Did we interfere illegally in their affairs?

* Did we establish hellish prisons and incarcerated some of them?

* Did we bring the world peace and security or raised the spectre of intimidation and threats? 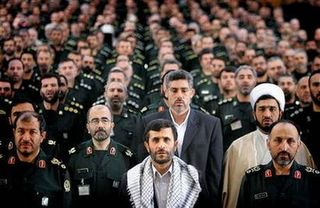 Details about the 18 page letter written by Iranian President Mahmoud Ahmadinejad to US President George W Bush yesterday are emerging. The BBC is reporting:

The letter – thought to be the first from an Iranian president to a US leader since Iran’s 1979 revolution – sparked intense interest, coming at a time of acutely tense relations between Washington and Tehran.

The 18-page document has not yet been made public, but according to leaks, Mr Ahmadinejad spoke of the invasion of Iraq, a US cover-up over the 11 September 2001 attacks, the issue of Israel’s right to exist and the role of religion in the world.

“On the pretext of the existence of WMDs [weapons of mass destruction], this great tragedy [the US invasion of Iraq] came to engulf both the peoples of the occupied and the occupying country.

“Lies were told in the Iraqi matter,” Reuters news agency quoted the letter as saying. “What was the result? I have no doubt that telling lies is reprehensible in any culture, and you do not like to be lied to,” Mr Ahmadinejad is quoted as saying.

The president also questioned the creation of Israel, asking “how can this phenomenon be rationalised or explained?”, Reuters reported.

In an apparent allusion to Iran’s nuclear programme, Mr Ahmadinejad is quoted by the Associated Press as asking: “Why is it that any technological and scientific achievement reached in the Middle East region is translated into and portrayed as a ‘threat to the Zionist [Israel] regime’? Is not scientific R&D [research and development] one of the basic rights of nations?”

In another part of the letter, Mr Ahmadinejad suggests Washington has concealed elements of the truth about the 11 September 2001 attacks on New York and Washington, Reuters reports.

“Why have the various aspects of the attacks been kept secret? Why are we not told who botched their responsibilities?” he asks.

The president ends the letter by appealing to Mr Bush to return to religion.

“We increasingly see that people around the world are flocking towards a main focal point – that is the Almighty God.”

“My question for you is, ‘Do you not want to join them?'”

You’ve got to love that! The man who wants to “Wipe Israel off the Map!” is preaching religion to Bush!

Sounding like like a member of the democratic party in the US, Ahmadinejad also says that democracy has failed in the world and talked of “an ever increasing global hatred” of the US government.

Mahmoud Ahmadinejad says he is waiting for a response to the letter.

Suzie at Assorted Babble has more on the Iran showdown in the horizon.

And, Fausta explains how the disastrous foreign policy of the Carter, Clinton and Kennedy administrations got us to where we are today.