The UN says the situation is totally unacceptable and must change because people have to live a better life and have a better future. 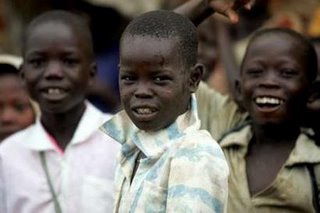 Internally displaced Ugandan children look on in the rain at Olwal camp in this file photo taken on March 21, 2005 in northern Uganda where almost two million people have been displaced by the conflict between the government forces and the rebel Lord Resistance Army. (Reuters)

After 20 years of fighting the war in Uganda rages on:

The current rate of death from the war in northern Uganda is three times higher than in Iraq following the Allied invasion, finds a new report released today. The release of the report comes as the UN Under-Secretary General Jan Egeland holds high-level meetings in Kampala with the Ugandan government and other international representatives to address the 20-year conflict in northern Uganda.

The report by a coalition of over 50 leading non-governmental organisations, Civil Society Organisations for Peace in Northern Uganda (CSOPNU), reveals new facts and figures showing the brutal impact of the conflict between the Government of Uganda and the rebel Lord’s Resistance Army on the civilian population. The coalition includes Oxfam International, Care International, Norwegian Refugee Council, Save the Children and International Rescue Committee as well as national and community based organisations.

Almost two million people have been displaced by the conflict. A staggering 25,000 children have been abducted during 20 years of war. One quarter of children in northern Uganda over ten years old have lost one or both parents.