The news that Saddam Hussein will be brought up on charges of genocide against the Kurds ought to be enough to make us all thankful this evil tyrant has been removed. But, sadly, this story will be mostly ignored.

VIDEO OF THIS ANNOUNCEMENT HERE
This clip includes pictures of the poisonous gas attacks.

The trial of Saddam Hussein is still a big story in some places.

I guess if you knew one of the 50,000 people a year who was eliminated under his regime (compared to the 20-38,000 that have been killed in the last three years of war) you might be interested in the trial of Saddam Hussein, as well. 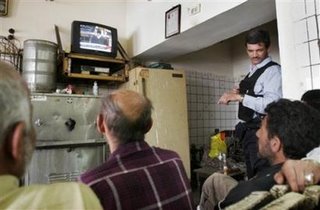 Iraqis watch the trial of Saddam Hussein Wednesday April 5, 2006 at a coffee house in Baghdad, Iraq. Saddam Hussein was cross-examined for the first time in his six-month-old trial Wednesday, saying he approved death sentences against Shiites in the 1980s because he believed the evidence had proven they were involved in an assassination attempt against him. (AP Photo/Mohammed Hato)

The trial of the mass murderer continued today in Iraq. Saddam was cross examined for the first time on the charges that he killed 148 Shiites in the 1980’s including children. He said there was eveidence that they had tried to kill him:

Standing alone as the sole defendant in the courtroom, Saddam dodged questions from prosecutors over his role in the crackdown, giving long speeches in which he called the court “illegitimate.” He also accused the current Shiite-led Interior Ministry of killing and torturing thousands of Iraqis and bickered with chief judge Raouf Abdel-Rahman.

The session came a day after prosecutors indicted Saddam on separate charges of genocide, accusing him of trying to exterminate Kurds in a 1980s campaign that killed an estimated 100,000 people. The charges will be dealt with in a separate trial.

In the current trial, Saddam and seven former members of his regime are charged in a crackdown against Shiites launched after a 1982 assassination attempt against Saddam in the town of Dujail. In the sweep that followed, 148 Shiites were killed and hundreds were imprisoned, some of them undergoing torture. 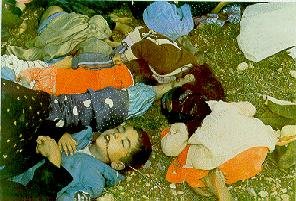 This text is taken from “What happened to Halabja on the Bloody Friday?”

The brutal massacre of the oppressed and innocent people of Halabja began before the sunrise of Friday, 17th of March 1988. The Iraqi regime committed its most tragic and horrible crime against the civilian people on Friday, 17th of March, 1988. On that day, Halabja was bombarded more than twenty times by Iraqi regime’s warplanes with chemical and cluster bombs. That Friday afternoon, the magnitude of Iraqi crimes became evident. In the streets and alleys of Halabja, corpses piled up over one a nother. Tens of children, while playing in front of their houses in the morning, were martyred instantly by cyanide gases. The innocent children did not even have time to run back home. Some children fell down at the threshold of the door of their houses and never rose.

Maybe the Kurds will finally see a sliver of justice.

WILLisms looks at the genocide charges and explains, “Ironically, Iraq has been a signatory of the Convention on the Prevention and Punishment of the Crime of Genocide since 1959.”