With strong links to Al Qaeda, Abdul-Mahid al-Zindani leads the prosecution team in a Yemeni journalist’s trial. Al-Zindani seeks the death penalty for Mohammed Al-Asadi the Editor-in- Chief of the Yemen Observer, the Danish Muhammad cartoons. 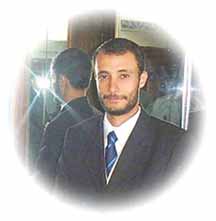 Mohammed Al-Asadi, the Editor-in-Chief of the Yemen Observer, may be put to death for publishing a Danish Muhammad cartoon.

Sugiero in Spain sends this news:

SANA’A – Up to 21 prosecution lawyers called for the death penalty for Mohammed Al-Asadi, the Editor-in-Chief of the Yemen Observer, and the permanent closure of the newspaper, during Al-Asadi’s trial on Wednesday.The lawyers, commissioned by Sheik Abdul-Majid Zindani, the Chairman of Islah Shura Council and led by Mohammed Al-Shawish, also called for the confiscation of all the newspaper’s property and assets, and for financial compensation to be paid to be the Muslim’s ‘Finance House’, which last existed during the time of the Caliphs, 1200 years ago.

They recounted a story in which a lady was killed during the Prophet’s lifetime after she insulted him, and that the Prophet then praised the killer. They said that they wanted the same punishment to be applied on “those who abuse the Prophet” (PBUH).

And, Pia Causa reports this shocking news about the prosecution team:

Yemen Observer Editor in Cheif Al-Asadi is facing death penalty in Yemen. The prosecutors in the case are lead by Al-Zindani, who is on the international list of terrorists closely linked to al Qaeda and bin Laden.

American Daughter has more on the Al Qaeda leader of the prosecution team:

“Abdul-Mahid al-Zindani is the leader of the Islamist political party and a member of the current government, the Chairman of Islah Shura Council (judiciary). He has imprisoned Mohammed Al-Asadi, the editor of the leading Yemeni English-language newspaper. The print operations of the Yemen Observer have also been suspended. (The talented journalists associated with the newspaper have so far managed to keep their website edition online.) And al-Zindani has commissioned a team of 21 lawyers to prosecute the case and seek the death penalty for the editor.

Al-Zindani is a leading radical Islamic cleric in Yemen. He is the founder and leader of the Al Iman University in Sanaa, Yemen, whose 5,000 strong student body is recognized as a breeding ground for terrorists. He is a known associate of Osama bin Laden, linked to financing and weapons procurement for al Qaeda.”

Michelle Malkin has a huge roundup on this tragedy with accounts of the prosecution’s side show and links to who you can contact to help this journalist.

You can also send an EMAIL HERE from the Free Al Asadi website.

The Anchoress has more contact information for you if you would like to help this man.
Slapstick has more on the threatened journalist.