Muslims and Hindus joined together to protest the bombings last week in the Holy City of Varanasi. 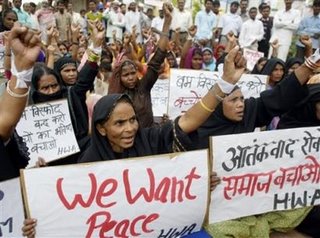 Hindu and Muslim women shout slogans during a rally against Tuesday’s string of bomb explosions that killed 20 people at a temple and train station in Varanasi, India, Saturday, March 11, 2006. About 150 Hindu and Muslim residents marched Saturday through the streets of Varanasi, a city fames for its shrines on the banks of the River Ganges, shouting slogans against terrorism and urging Pakistan to foster friendship with India. (AP Photo/Rajesh Kumar Singh)

Terrorist attempts to divide the Varanasi and create communal havoc in the Hindu Holy City and beyond seems to have failed:

Not only did the people foil the nefarious designs of the terrorists but they also snubbed the political leaders who tried to gain political mileage out of the situation.

Leading citizens, intellectuals, businessmen, youth activists, social workers and cultural bodies organised a number of peace marches, meetings and candlelight processions to drive home the message of communal harmony and unity. Mahant Bhawani Nandan, chief of the Haathiyaram Math, has taken the lead in organising prayers for those killed in the blasts. 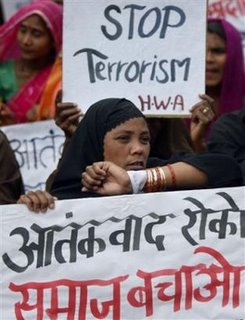 Hindu and Muslim women shout slogans during a rally against Tuesday’s string of bomb explosions that killed 20 people at a temple and train station in Varanasi, India, Saturday, March 11, 2006. (AP Photo/Rajesh Kumar Singh)

The Hindus in Varanasi refused to give into the plans of the terrorists who set off a bomb in a Hindu temple and at a train station:

The Hindus of Varanasi didn’t play into the hands of the enemies of the nation and stayed calm. It also goes to the credit of the Muslims of Varanasi who stood by the side of their Hindu brethren and condemned the dastardly act. The majority community in the rest of the country too stayed calm and peaceful. This may not always happen and so conscious efforts in this regard are necessary.

We will be playing into the hands of he enemy if we rush at each others throat the moment some incident of this nature happens. We have to be prepared before hand and display total solidarity so that nefarious designs of the enemies are defeated? Four, the likes of Yakoob Qureshis who whip up religious passions and create situations for disharmony foul the atmosphere and must be reined in.

On Tuesday March 7, 2006, terrorists set off bomb blasts inside the famous Sankatmochan and at the railroad station nearby.