Next They Came for the Folk Dancers, the Kites and the Cheese

This week’s list of banned activities by Radical Islam:

In India… Rubiya’s parents have encouraged her to dance although the local mosque has shunned the family. 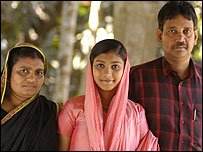 A 16 year old Indian Muslim girl and her family have been shunned from the local mosque because of her Indian style of folk dancing:

But, her Muslim family in India’s southern state of Kerala say they are being shunned by the local mosque committee (mahallu) because she is practising Indian classical dance.

She also won the dance competition at the Veeran Haji Memorial Higher Secondary School at Morayur in the Muslim-dominated district of Malappuram.

It was Rubiya’s 27 points that helped her home district move up from seventh to fifth position at the state school festival.

Now she has an offer from the celebrated Indian dancer Mrinalini Sarabhai’s dance academy, Darpana, her father Syed Alavikutty says.

In Pakistan… “861 persons have died” since January 2000 from kite accidents after kite string slit their throats, or they fell from buildings, or they were electrocuted, and thousands more have been severely wounded. 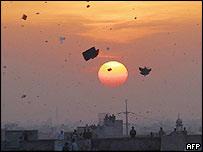 The government of Pakistan has banned flying kites for most of the year. This week nearly 1,000 pakistanis were arrested on “terrorism charges” after 10 people were killed by kites the previous week. (Unbelievable, yes!)

The picture on the right shows kites flying during Basant Festival in Pakistan. (BBC)

This does not upset Fundamentalist groups in Pakistan who believe that flying kites is un-Islamic!

Pakistan’s supreme court banned kites in 2005 amid complaints that they killed dozens of people every year.

The ban was lifted for 15 days this year at the request of the provincial government so the festival could go ahead, on condition that dangerous string was outlawed.

Fundamentalist groups also oppose kite-flying on the grounds that it is un-Islamic.

In Egypt a Coptic man was arrested for eating Danish Cheese this week! 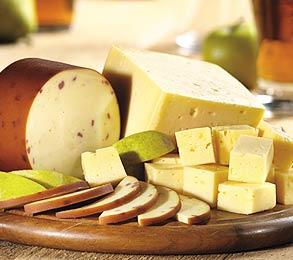 In Egypt… Big Pharoah reports a sad story where an Egyptian Coptic man was arrested for eating Danish Cheese:

The man, who owns a shop, was seen by neighbors while eating Danish cheese. They asked him why he’s not boycotting Denmark and he answered that he’s just not boycotting it. Later members of Egypt’s notorious National Security police arrived at his place and asked him to go with them.

Free Copt says that the man is not in good health.

Solomonia has more on his arrest.
Don’t Go Into The Light has an un-Islamic kite drawing.