The afternoon protest in Bahrain went downhill from here… 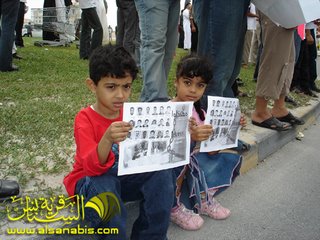 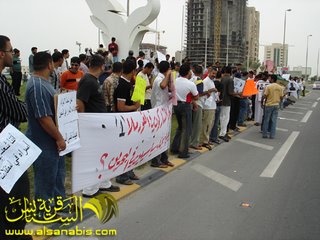 There is basically a pitched battle currently taking place near Dana Mall. I was there about a half hour ago (8pm) and there were masses of riot police on one side firing what I assume is tear gas and rubber bullets. While on the other side in Sanabis housing were some youths who were responding with I believe rocks and had blocked one of the roads with burning tyres and rubbish.

It started out in the afternoon as another demonstration outside Dana Mall to demand the release of the men who were jailed because of the Dec 25 airport clash. According to the people I spoke to, the riot police were soon on the scene and the protesters refused to leave so the cops attacked them (with tear gas and possibly violence). Several of the demonstrators took refuge in Dana Mall so the police sealed it off and IÂm not sure what else. 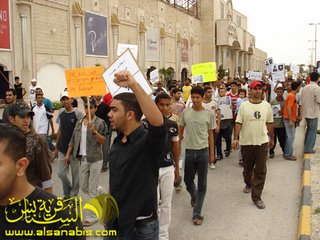 There are more demonstrations planned for tomorrow and the day after. Had todayÂs violence not occurred, I donÂt think the coming protests would have attracted many people, but I suspect that now there will be alot more people. 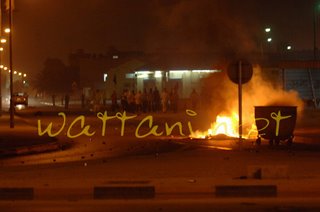 (Wattani)
Video from when things turned ugly, HERE
I doubt that made the nightly news!

On to Iran…
Celebrating Womens Rights in Iran before the Mullahs decided otherwise. 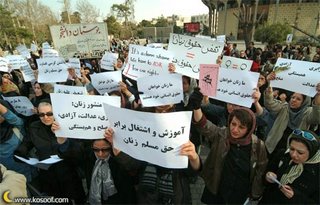 The first protest took place in Tehran, Iran on International Women’s Day.
The mullahs are not doing too well on in the polls lately where:

69% of the Iranians do not recognize the nuclear issue a matter of national aspiration and 86% do not believe that nuclear technology is worth a military conflict. Only 11% of those polled believe that the populist Ahamadinejad is capable of solving their economic problems. 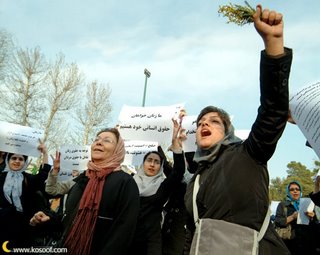 So how do the mullahs react to such news? Here is Reuters account via Regime Change Iran:

“This was a completely peaceful gathering with no political overtones or slogans,” one participant told Human Rights Watch. “We just held up signs in solidarity with the international women’s rights movement.”

Within minutes, after agents photographed and videotaped the gathering, the police told the crowd to disperse. In response, the participants staged a sit-in and started to sing the anthem of the women’s rights movement, one participant told Human Rights Watch.

The security forces then dumped cans of garbage on the heads of women who were seated before charging into the group and beating them with batons to compel them to leave the park.

HERE is unbelievable video that made it out of the country of the brave Iranian women singing the anthem to the women’e rights movement. Regime Change Iran has more video.

Stefania has video and pictures of this protest for Women’s Rights.
This is amazing video from the mullacracy.

“We commemorated International Women’s Day under conditions of suffocation and subjugation that looms like a black cloud of doom over our Iran; like citizens of other countries around the world, Iranian women of all social classes gathered to observe this festival of freedom. Despite weeks of threats that the regime had launched against us, in an attempt to strike fear and intimidation in everyone’s hearts, bullying all attendees with violence, aggression, arrest and detention, approximately 2000 women and freedom-loving youth who would not be intimidated by this bloodthirsty regime, did show up.”