Dr. James Dobson responds to accusations by a far left group that he’s knee-deep in the Ambramoff scandal and has a “gambling problem”,
FOX NEWS VIDEO HERE 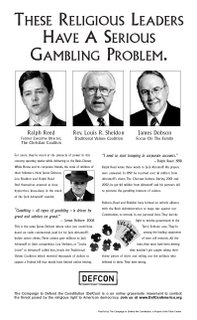 The ads accuse Dr. Dobson of having ties with Jack Abramoff which Dr. Dobson vehemently denies:

The ads, by Campaign to Defend the Constitution, highlight what it calls hypocrisy over gambling by “religious right leaders,” including Dobson, who is founder and head of the Colorado Springs-based conservative evangelical organization.

The campaign will begin with a $200,000 ad in The New York Times, claiming that “These Religious Leaders Have a Serious Gambling Problem.”

The ads center on the actions of Abramoff, who represented Indian tribes with gambling interests before he was accused of bilking the tribes out of millions of dollars and improperly influencing public officials.

One of Abramoff’s clients, the Louisiana Coushatta tribe, tried to block approval of a competing casino project in Louisiana by the Jena Band of Choctaws.

Meanwhile, e-mails released during a subsequent congressional investigation, suggested that Abramoff claimed he got Dobson involved, too.

Tom Minnery, vice president of Focus on the Family, wrote a letter to Interior Secretary Gale Norton opposing the Jena casino. Minnery said last year that there was nothing unusual about that, since Focus on the Family opposes gambling because it hurts families.

Dobson denies that he had any contact with Ralph Reed concerning the gambling accusations and says he would not know Abramoff if he walked into him on a crowded street.

Max Blumenthal wrote about the contrived conspiracy at the Huffington Post on Wednesday, March 7:

Reed managed to lasso Focus on the Family President James Dobson into a series of campaigns to stamp out competition to Abramoff’s clients. Though Senate subpeonaed emails seem to confirm that Dobson was manipulated by Reed and Abramoff, he and his employees have repeatedly claimed that his activism against rivals to Abramoff’s clients was a complete coincidence.

While I wrote about this for the Nation and Media Matters, there has been very little mainstream press interest on Dobson’s role in Abramoff’s schemes.

Probably because there is nothing there!