The Democratic Party continues to defame President Bush with a bogus story “AP: Bush Knew About Levee Dangers” even after the AP retracted the story one full week ago.

For the democrats to continue to post this article after it has been retracted is slander, pure and simple. 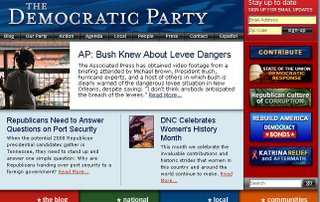 The front page of the DNC website on March 10, 2006, one full week after the AP corrected its faulty report!

The Democratic Party’s lead article on their website is based on a bogus report by the Associated Press that was corrected by the AP one full week ago!

This is exactly why you can’t believe anything this administration says. From news about a trivial biking accident overseas, to serious catastrophes in the Gulf Coast, Scott McClellan, Michael Chertoff, Vice President Cheney, President Bush, and whoever else trots in front of the microphone from this administration will say whatever it is they have to say in order to weather whatever situation their incompetence has landed the American people in.

The Associated Press obtained BLOCKBUSTER video footage from a briefing attended by Michael Brown, President Bush, hurricane experts, and a host of others. From the report filed by the AP.

Here is the AP article they link to:

Patterico’s Pontifications was the first to notice the AP’s faulty reporting on the story:

The AP Story (reprinted at the LA Times) is designed to suggest that Bush was warned beforehand that the levees might be breached — and therefore lied when he said that nobody anticipated the breach of the levees.

But the “very, very grave concern” referred to in the video is not whether the levees would “stand up against the storm” (i.e. whether or not they would be breached), but whether they would be topped. Let’s go to the transcript, which (inconveniently for The Times) dispels the dark suggestion that BushLied.

Eventually, on Friday March 3, 2006, the AP was forced to retract their bogus story as reported at Wizbang:

WASHINGTON (AP) _ In a March 1 story, The Associated Press reported that federal disaster officials warned President Bush and his homeland security chief before Hurricane Katrina struck that the storm could breach levees in New Orleans, citing confidential video footage of an Aug. 28 briefing among U.S. officials.

The Army Corps of Engineers considers a breach a hole developing in a levee rather than an overrun. The story should have made clear that Bush was warned about floodwaters overrunning the levees, rather than the levees breaking.

The day before the storm hit, Bush was told there were grave concerns that the levees could be overrun. It wasn’t until the next morning, as the storm was hitting, that Michael Brown, then head of the Federal Emergency Management Agency, said Bush had inquired about reports of breaches. Bush did not participate in that briefing.

So, there was no story except for the fact that Governor Blanco assured the president the levees were safe the day after Katrina hit and FEMA Director Michael Brown praised the president for his handling of the tragedy after the storm hit.

But, this does not stop the Democratic Party from slandering the president… Sad!