The former code-enforcement chief from East St. Louis “was sentenced Monday to four and a half years in prison for scheming to buy votes in the November 2004 election.”

East St. Louis Democratic Party workers told Mark Kern days before he was elected St. Clair County Board chairman that voters would have to be paid to support him, the first witness in a federal vote fraud trial testified today.

She said Ellis, a party stalwart and then director of regulatory affairs, told Kern he was perceived in the predominantly-black community as a “racist’ and might need to spend $10 per vote to get support. She said Ellis described a need “to pay the voters to come out.”

On Oct. 30, the St. Clair County Democratic Party provided $67,000 to Ellis and other East St. Louis Democrats to get out the vote.

Kelvin Ellis was also indicted for plotting to kill a federal witness.

Kelvin Ellis was sentenced today to 4 and a half years in jail. 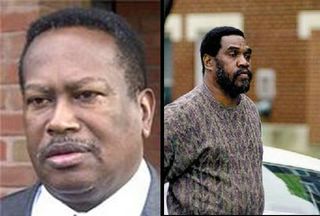 Kelvin Ellis (left) and Charles Powell Jr., Democratic Committeemen from East St. Louis, Illinois are looking at time. Therefore, Kelvin will not be running prostitutes from City Hall any longer.

Ellis, 55, who once served a prison term after abusing a city post, was the director of regulatory affairs, which put him in charge of housing inspections. He also was a precinct committeeman with close ties to the community’s Democratic Party leaders.

The indictments in January 2005 accused Ellis of trying to have an unidentified witness killed. Court documents say he is a target of an ongoing vote fraud inquiry. He also was accused in a separate indictment of income tax evasion.

Plotting the Murder
from a January 2005 SLPD article:

The investigation became public last year when more than a dozen subpoenas were delivered to city Democratic Party leaders after the November election.

According to one of Ellis’ indictments, the investigation began at least a month earlier. A female witness told agents on Oct. 5 that Ellis, “had committed election fraud and other potential criminal offenses.” Ellis learned the same day of the substance of what she had said, the indictment states.

In the following days, Ellis spoke repeatedly with an unidentified person, first discussing plans to discredit the witness, perhaps through a bogus drug sting, court documents say. The indictment includes excerpts of what appear to be recordings of these conversations between Ellis and the other person.

“I want her credibility destroyed,” Ellis is reported to have said. She is “trying to destroy us. No telling what she’s saying.”

As the weeks passed, the conversations turned more sinister, with Ellis saying on Nov. 19, “I want her … taken out, however we have to do it.”

The East St. Louis director of regulatory affairs, conspired to discredit, then murder, a federal witness because she had threatened to expose a prostitution ring Ellis was running out of City Hall.

At the end of the 90-minute hearing in January, U.S. Magistrate Clifford Proud ordered that Ellis remain in jail, finding that the evidence arrayed against him is “powerful” and “compelling.”

Proud based the decision to keep Ellis, 55, in jail on a series of audio- and videotapes that Deputy Police Chief Rudy McIntosh, a government informant, secretly made in October and November while allegedly conspiring with Ellis to plant drugs on a prostitute and drug abuser known as “Jane Doe.”

Assistant U.S. Attorney Hal Goldsmith played parts of the tapes in open court to support his argument that Ellis’ plot to discredit Jane Doe spiraled into a murder-for-hire scheme. He argued Ellis poses a threat to the community.

Goldsmith said Jane Doe presented prosecutors with “an allegation that Ellis was running an escort service out of the Department of Regulatory Affairs.”

The federal informant who was instructed by Ellis to plant crack cocaine on n as well as murder n “Jane Doe,” a female witness who cooperated with federal authorities

At one point during the hearing, a video clip revealed a smiling Ellis as McIntosh showed him a faked photo of the so-called “murder” of “Jane Doe.” It looked like a criminal version of “Taxicab Confessions.”

However, the shock of the hour unfolded during Ellis’ detention hearing, when further allegations surfaced that Ellis’ motivation for murder stemmed from a threat by “Jane Doe” to expose a prostitution ring supposedly operating out of Ellis’ City Hall office, with Ellis allegedly in the role of “head pimp.” Now, that gives a whole new meaning to “providing city services” (if you know what I mean)!

We know what you mean!

Jesse Lewis, a former Democratic precinct committeeman, was sentenced to one year and three months in prison, two years of supervised release and $200 in fines.

Ellis, Lewis, Thomas and Johnson also were convicted of election fraud for allegedly paying or offering to pay for at least one person to vote. Powell was never charged with that count.

Last week, Thomas, 33, was ordered to spend a year and a half in pri
son followed by two years of supervised release, while Johnson, 47, received two years of probation that includes five months of home confinement.

Four other defendants — three precinct committeemen and a precinct worker — pleaded guilty to a related count of vote buying and await sentencing.

At least 16 St. Louis area Democrats have been found guilty of election crimes in the last year.