Cindy is released from her time in jail last night after the SOTU Address,
VIDEO HERE

I told him that my son died there. That’s when the enormity of my loss hit me. I have lost my son. I have lost my First Amendment rights. I have lost the country that I love. Where did America go? I started crying in pain.

Cindy is appreciative to the protesters who came down to jail to support her. 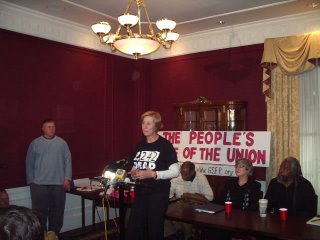 Cindy spoke in the afternoon with Representative John Conyers and Congresswoman Lynn Woolsey in the background at the “People’s SOTU Address”. Rep. Woolsey gave Cindy her ticket to get into the SOTU Address.

Cindy Speaks to media after her arrest:

As most of you have probably heard, I was arrested before the State of the Union Address tonight.

I am speechless with fury at what happened and with grief over what we have lost in our country.

There have been lies from the police and distortions by the press. (Shocker) So this is what really happened:

After the PSOTU press conference, I was having second thoughts about going to the SOTU at the Capitol. I didn’t feel comfortable going. I knew George Bush would say things that would hurt me and anger me and I knew that I couldn’t disrupt the address because Lynn had given me the ticket and I didn’t want to be disruptive out of respect for her. I, in fact, had given the ticket to John Bruhns who is in Iraq Veterans Against the War. However, Lynn’s office had already called the media and everyone knew I was going to be there so I sucked it up and went.

I had just sat down and I was warm from climbing 3 flights of stairs back up from the bathroom so I unzipped my jacket. I turned to the right to take my left arm out, when the same officer saw my shirt and yelled; “Protester.” He then ran over to me, hauled me out of my seat and roughly (with my hands behind my back) shoved me up the stairs. I said something like “I’m going, do you have to be so rough?” By the way, his name is Mike Weight.

The officer ran with me to the elevators yelling at everyone to move out of the way. When we got to the elevators, he cuffed me and took me outside to await a squad car. On the way out, someone behind me said, “That’s Cindy Sheehan.” At which point the officer who arrested me said: “Take these steps slowly.” I said, “You didn’t care about being careful when you were dragging me up the other steps.” He said, “That’s because you were protesting.” Wow, I get hauled out of the People’s House because I was, “Protesting.”

I was never told that I couldn’t wear that shirt into the Congress. I was never asked to take it off or zip my jacket back up. If I had been asked to do any of those things…I would have, and written about the suppression of my freedom of speech later. I was immediately, and roughly (I have the bruises and muscle spasms to prove it) hauled off and arrested for “unlawful conduct.”

…Four hours and 2 jails after I was arrested, I was let out. Again, I am so upset and sore it is hard to think straight.

Keep up the struggle…I promise you I will too.

Cindy jumps the gun. Hence, an escort to jail. 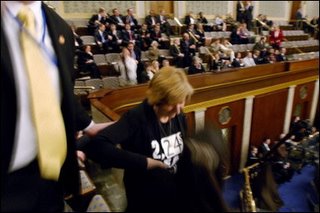 Anti-war protester Cindy Sheehan is escorted out of the spectators’ gallery of the House of Representatives prior to the State of the Union Address by US President George W. Bush on Capitol Hill in Washington, DC. Sheehan was attending the president’s speech as a guest of US Representative Lynn Woolsey, a Democrat who has been an outspoken opponent of the war in Iraq(AFP/Mandel Ngan)

Democrats.com is outraged at Cindy’s arrest.

Tammy Bruce has more on the Malignant Narcissist.
Gay Patriot reminds that “Cindy Sheehan calls the National Anthem the Hymn to War”
Another Rovian Conspiracy describes the chill wind blowing across our land.
Michelle Malkin says “Shame on Lynn Woolsey.”
Mark in Mexico talks more on Cindy’s weighty problems.
Sister Toldjah has a complete roundup on the arrest and the law that was broken.
Texas Rainmaker has more on Cindy’s invite last night.

Previously:
Look for Cindy at the SOTU Address

Jim Hoft
Jim Hoft is the founder and editor of The Gateway Pundit, one of the top conservative news outlets in America. Jim was awarded the Reed Irvine Accuracy in Media Award in 2013 and is the proud recipient of the Breitbart Award for Excellence in Online Journalism from the Americans for Prosperity Foundation in May 2016.
"A Demented Pervert - Who Can't Tie His Own Shoelaces or Know Where He Is" - Sidney Powell Goes Off on Imposter President Joe Biden (VIDEO)
"Who Is Putting Up the Signs Pointing to Asylum at the US Border in Texas" - Louie Gohmert Makes Startling Discovery on the Texas Border with Mexico
House Democrats Schedule Debate and Vote on Reparations for Black Americans
Louisville Police Sent Out to Arrest Murder Suspect -- What Happened Next Was Insane! (VIDEO)
Pro-Trump Congressional Candidate Brian Harrison Joins TGP's Jim Hoft and 100%FedUp's Patty McMurray to Discuss the TX District 6 Special Election (VIDEO)
See more...

Louisville Police Sent Out to Arrest Murder Suspect -- What Happened Next Was Insane! (VIDEO)