In the latest battle of the “Cartoon Wars”, the German Daily “Spiegel” is under siege by Iran for a controversial soccer cartoon they published last week.

But, this cartoon has nothing to do with Muhammad!

Iran did not appreciate “Iran” printed on the soccer players/bombers T-shirts. 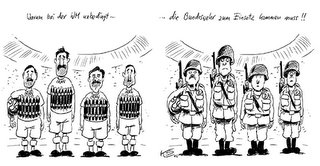 Caption- “That’s why it’s absolutely necessary to have the army around.”

The Iranian ambassador in Berlin is asking the German daily “Der Tagesspiegel” (big, influential, liberal) to apologize for and “take all steps necessary for retribution of this immoral act”, because they published a cartoon about soccer, that has “caused outrage and horror in Iran and worldwide”.

The cartoon accompanied an article (10 Feb 2006) that argued against the idea that it may be a necessary to have the German army support the police force in securing the soccer world championship 2006 in Germany.

The cartoon depicts a soccer team (Iranian, say the ambassadors) in a soccer arena, wearing suicide bomber belts, watched over my German army personnel. Caption: “That’s why it’s absolutely necessary to have the army around.”

Big Hat Tip to Erdal T. for the Story

So now it appears that any cartoons depicting human bombs are off limits. The Europeans will have to remember to add that to their charter!

It is interesting how even though the Iranians brag about their trained and committed suicide bombers, they are insulted when they are depicted in Western cartoons.

No surprise, Davids Medienkritik is reporting the story today. Davids updates that the cartoonist’s family has now moved out of their home for security reasons.

Jay at Stop the ACLU notices who the Mullahs are blaming, again.

El Presidente reports that the cartoon controversy has now made its way to the Rocky Mountains.

Mensa Barbie has more on the mullah’s martyrdom operations.