While the peace activists marched with peace torches, one of the cartoon faking Muslim Leaders is invited onto a television debate show. 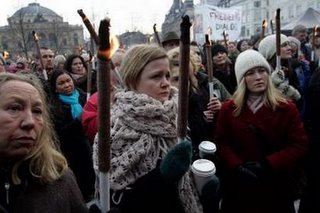 Hundreds of Danes gather for a peace torchlight procession demonstration to appeal for a peaceful dialogue to resolve a row that has erupted over the publication of cartoons of the Prophet Mohammed, in Copenhagen February 5, 2006. (REUTERS/Lars Moller/Scanpix)

Denmark urged all nationals to leave Lebanon after rioters attacked the Danish consulate in Beirut on Sunday.

Iran says that it will cancel all contracts with “countries” that reprinted the cartoons.

Ahmed Akkari joined Imam Abu Laban on his trip to the Mideast. 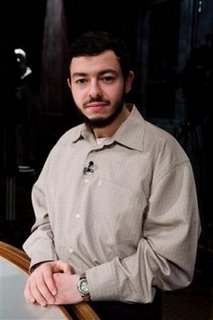 Spokesman Ahmed Akkari of the Danish Muslim group, Islamisk Trossamfund, is seen in Copenhagen, Denmark, before a televised debate on Danish television Sunday Feb. 5, 2006. Participants in the debate included editor-in-chief, Carsten Juste (not pictured) of the Danish daily Jyllands-Posten, which first published 12 cartoons of the prophet Muhammad Sept. 30, 2005. Several Danish politicians, Muslims and political experts also participated in the debate. The cartoons caused violent demonstrations and attacks on Danish and Norwegian embassies and consulates in Syria and Lebanon Saturday and Sunday. (AP Photo/POLFOTO, Carsten Snejbjerg)

Ahmed Akkari is also known for his now famous “cartoon tour” of the Middle East with Imam Ahmad Abu Laban. It was Akkari who was first interviewed back on January 14, 2006, via the Brussels Journal, about the mysterious obscene cartoons that were showing up on his tour:

Meanwhile, the Danish tabloid Extra Bladet got hold of a 43-page report that Danish Muslim leaders and imams, on a tour of the Islamic world are handing out to their contacts to “explain” how offensive the cartoons are. The report contains 15 pictures instead of 12. The first of the three additional pictures, which are of dismal quality, shows Muhammad as a pedophile demon [see it here], the second shows the prophet with a pigsnout [here] and the third depicts a praying Muslim being raped by a dog [here]. Apparently, the 12 original pictures were not deemed bad enough to convince other Muslims that Muslims in Denmark are the victims of a campaign of religious hatred.

Akhmad Akkari, spokesman of the 21 Danish Muslim organizations which organized the tour, explained that the three drawings had been added to “give an insight in how hateful the atmosphere in Denmark is towards Muslims.” Akkari claimed he does not know the origin of the three pictures. He said they had been sent anonymously to Danish Muslims. However, when Ekstra Bladet asked if it could talk to these Muslims, Akkari refused to reveal their identity.

Imam Ahmad Abu Laban has also so far refused to reveal the origin of the fake cartoons he used in his presentations to Muslim Leaders in the Middle East.

Imam Ahmad Abu Ladan is involved in an international group of Muslims who are known for supporting the anti-Western Islamist struggle of the school of global Jihad. 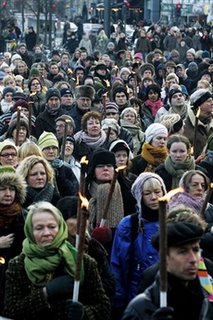 Hundreds of Danes gather for a peace torchlight procession demonstration to appeal for a peaceful dialogue to resolve a row that has erupted over the publication of cartoons of the Prophet Mohammed, in Copenhagen February 5, 2006. (Jan Jorgensen/Scanpix/Reuters)

The Philadelphia Inquirer is the first major U.S. daily newspaper to run one of the controversial cartoons.

Update: (Monday AM) 4 have been killed so far today in the “Cartoon Riots!”