“Chairman Dean set a new standard for Abramoff Democrats today and it’s clear that Sen. Reid did not make the cut. Dean specifically stated it was ‘a big problem’ if any Democrats wrote letters on behalf of Abramoff Indian tribes, which is exactly what Harry Reid and other Democrats did. Howard Dean has displayed a stunning level of hypocrisy on this issue, however it now appears that he may be interested in holding his fellow Democrats accountable.” 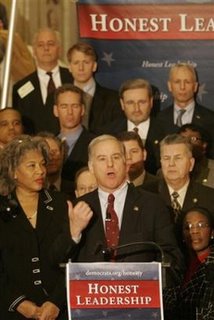 Democratic Party Chairman Howard Dean speaks at the Ohio Statehouse in Columbus, Ohio, Wednesday, Jan. 18, 2006. Democratic members of the Ohio House and Senate joined Dean to sign a national petition to Congress to restore honest leadership to government, which coincides with unveiling of Democrats’ lobbying reform package on Capitol Hill as Republicans line up their own legislative remedy. (AP Photo/Kiichiro Sato)

Fox News’ Chris Wallace: “[I]f We Find That There Were Some Democrats Who Wrote Letters On Behalf Of Some Of The Indian Tribes That Abramoff Represented, Then What Do You Say, Sir?” (Fox News’ “Fox News Sunday,” 1/29/06)

DNC Chair Howard Dean: “That’s A Big Problem, And Those Democrats Are In Trouble, And They Should Be In Trouble, And Our Party, If The American People Will Put Us Back In Power In ’06, We Will Have On The President’s Desk Things That Outlaw All Those Kinds Of Behaviors.”

Along with Senator Tom Harkin (D-IA) : “Harkin Wrote At Least Three Letters In 2003 Pressing The Government To Release Federal Money To Help The Sac & Fox Tribe In His State Cope With The Temporary Closing Of Its Casino Due To A Tribal Dispute, According To Interior Department Documents Obtained By The Associated Press And Records Provided By Harkin’s Office.”

As does Sen. Debbie Stabenow (D-MI): “[There Were] Half-Dozen Letters Written Or Signed By 14 Lawmakers On Behalf Of The Tribes. One Was Written Jan. 23, 2003 By [Democrat Sen.] … Debbie Stabenow … On The Saginaw’s Behalf.”

And, don’t forget Sen. Carl Levin (D-MI): “[There Were] Half-Dozen Letters Written Or Signed By 14 Lawmakers On Behalf Of The Tribes. One Was Written Jan. 23, 2003 By [Democrat Sen.] Carl Levin … On The Saginaw’s Behalf.”

This is what Howard Dean said three weeks ago to Wolf Blitzer:

It now looks like this wasn’t quite the smack down some thought it was.

Democrats Have Been Repeatedly Implicated In The Abramoff Investigation.

There is much more information at the GOP website.

Does this explain the rumors about new Senate Leadership?

Uncorrelated has a review of the Dean exchange with Chris Wallace and it is good! (via Sister Toldjah)