Referees give Gators a gift,… Hawkeyes are hacked off! 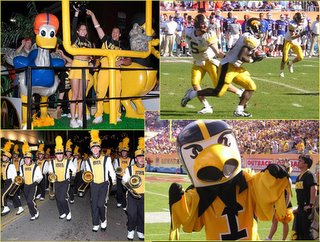 There is talk of a blogswarm over the controversial calls today during the Iowa Hawkeye- Florida Outback Bowl Game.

Iowa gets robbed on a call on an onside kick that took the ball from Iowa at the end of the game.

It was not even close on the instant replay. Between this call and the blown helmet-to-helmet penalty late in the first half, this game has been decided by the zebras. Outrageous, and incompetent. The NCAA needs to review the films from this game carefully, and if it is as egregious as it appears, these refs should not work another bowl game.

And, Wow!… Best Bowl Moment… The Tostitos Fiesta Bowl just surprised a young woman at halftime with a surprise reunion. Her boyfriend, a soldier stationed in Iraq, was flown back for the game. Then he surprised her again with a marriage proposal live on TV!

** To cap off a wonderful day of sport, “Rollergirls” is playing tonight, the new series on a Texas roller derby league. This could be a great moment for women’s sports, Hey! **

9:10- The rookie girl, Venus Envy, just got a beatdown on the rink from the tough girl. Now they’re giggling.

9:27- The team is a mess. It’s one day before the bout. The new girl calls her mom who is coming tomorrow. Mom is nervous but loves what her baby is doing.

9:29- “Amazing Grace” is playing in the background as the girls practice.

9:30- Lux is blowing darts through a straw. Two girls went to the country bar to relax a bit the night before the match (a no-no).

9:33- The new girl, Melissa, is explaining “blocker” and “jammer” positions to her Mom who made it in. It was a very touching moment.

9:38- Cha Cha says they are targeting one of the Puta girls… It’s go time!

9;44- Rookie girl gets in. Mustang Sally and Venus Envy make a break. Rhinestone Cowgirls get a point. Venus Envy was roughed up but has a good attitude… next round– Venus Envy breaks through and scores!

9:47- The match is at halftime, the girls are relaxing next to the fence, doing shots.

9:49- Second half- Venus trips up Lux, then scores! It’s a close match both teams are league leaders. It’s getting rough. It’s coming down to the wire. It’s 43 to 42 and Gunsmoka la Coca just scored in this nailbiter. The Rhinestone Cowgirls win! Venus says her mom handled it well, especially since her a$$ was hanging out. The girls meet up in the bar for a little debrief on the match. Venus and Mustang Sally chat after the match. They make up, hug, kiss. (scenes from next week)

We’ll just have to wait until next week to see if “Gunsmoka la Coca” can handle the the big girl down inside!