Many of the original members from the world’s tallest restuarant have regrouped after “Windows to the World” restaurant was destroyed on 9-11. The workers decided they wanted to make something positive from their experience. 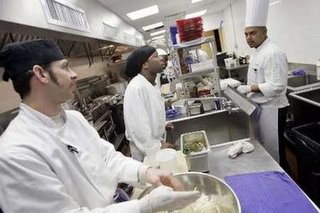 Sous chefs Francesco Palmieri (L) and Jean Pierre (C) talk to executive chef Raymond Mohan as they prepare for the opening of their restaurant Colors in New York January 5, 2006. Pierre and Palmieri are part of the co-op owned restaurant started by former employees of the Windows of The World restaurant that was destroyed in the September 11, 2001 attacks that destroyed the World Trade Center. (REUTERS/Keith Bedford)

More than four years after the September 11 attacks that destroyed the World Trade Center and killed 73 of their co-workers, chefs, waiters, bartenders, busboys and dishwashers who worked at Windows have come together to run an upscale restaurant named Colors.

“This restaurant is about diversity, bringing together different cultures,” assistant chef Francesco Palmieri said as he stirred a Caribbean style conch stew.

The restaurant, a few doors down from Greenwich Village’s Public Theater, is about a 20-minute stroll from where Windows on the World was located.

Colors’ decor is modern with a colorful map mural running along one wall.

There are no tributes to the scenic Windows restaurant that once seemed to float atop the trade center’s north tower, but the old haunt was still on the minds of many.

“Sometimes I think about it,” said line cook Kissima Saho of Gambia, West Africa, as he chopped lobsters and pulled out the sweet meat. “I miss my crew members who lost their lives. I miss them. I miss the money I used to make.”

Pierre, a native of Haiti, said the 50-member cooperative of former Windows on the World employees was “trying to help New York build another restaurant, a new kind of restaurant.”

Immigrants from about 25 countries are represented in Colors’ 50-member cooperative, which will split up any profits.