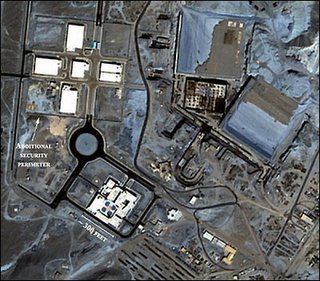 This satellite image obtained from the private company DigitalGlobe shows a close-up view of facilities near the town of Nantanz, Iran, some 160 kilometers (100 miles) south of Tehran. Iran has secretly built thousands of centrifuge machines for its nuclear plant at Natanz, an exiled opposition figure alleged.(AFP-DigitalGlobe/File)

After Iran broke the seals on the Nantanz Nuclear Plant this morning an Iranian exile revealed that the nuclear site has several thousand centrifuges and had already committed violations before today:

Jafarzadeh, citing what he said was intelligence from the Iranian opposition and sources within the Iranian nuclear program, said Tehran had already committed serious violations before Tuesday.

“Iran has already manufactured as many as 5,000 centrifuge machines ready to be installed in Natanz, which is a clear breach of its agreements with the IAEA and the EU,” Jafarzadeh, former spokesman for the National Council of Resistance of Iran, said at a press conference here.

He said Iran had been continually building underground centrifuge cascade installation platforms at Natanz which could be used in the process of enriching uranium on a large scale suitable for a nuclear bomb.

Jafarzadeh released information in 2002 which amounted to the first outside glimpse into the Iranian nuclear program and which triggered International Atomic Energy Agency (IAEA) scrutiny.

He said that work at Natanz was now so advanced that construction could be finished by the middle of this year, though it was unclear when installation of enrichment facilities would be complete.

IRAN BROKE THE SEALS TO ITS NUCLEAR PLANT IN NATANZ TODAY,
VIDEO HERE

Iran in an earlier confession admitted that it had deceived nuclear inspectors for years, although it continues to insist that its program is meant for peaceful purposes only. However, the US and to some extent European governments claim that the Natanz site is part of a long-suspected nuclear weapons program that is more advanced than the Iraqi program was at its height under Saddam Hussein’s rule.

A view of Natanz uranium enrichment facility, 155 miles south of the Iranian capital of Tehran, March 30, 2005. The U.N. nuclear watchdog confirmed on Tuesday that Iran has broken U.N. seals at the Natanz facility, setting the stage for a showdown between the Islamic republic and the West. (Raheb Homavandi/Reuters)

Iran broke the international seals to its nuclear plant and will resume nuclear research at the facility today:

The move ends a two-year suspension of research, and could result in Tehran being referred to the UN Security Council for possible sanctions.

France called the move a “grave error”, and the UK said the world was running out of patience with Iran.

Western countries fear Iran’s nuclear programme could be used to make atomic bombs, but Tehran denies such a goal.

It says the project is for the peaceful production of energy only.

The resumption of research on Tuesday at the Natanz site suggests all of Iran’s nuclear activities, apart from uranium enrichment – a key stage in making a nuclear bomb – have been revived.

The US and EU immediately condemned the latest move.

Gregory Schulte, the US ambassador to the IAEA, said it showed Iran’s “disdain for international concerns and its rejection of international diplomacy”.

Iranian observers were stunned with the boldness of the move by the mullahcracy:

Iran has been warned by the United States, Britain, France and Germany that any enrichment of nuclear fuel would constitute a “red line” it must not cross, or risk swift referral of the matter to the IAEA’s governing board, and from there to the United Nations Security Council.

“When we learned last week that Iran was going to resume some ‘research and development’ work at Natanz, we assumed there would be some modest initial activity, such as the production of centrifuge components, but this is a much bigger step,” said Robert Einhorn a former assistant secretary of state for nonproliferation who is now with the Center for Strategic and International Studies.

Einhorn added that mastering the operation of a 164-centrifuge cascade — such as the one at Iran’s Natanz facility — is a “significant milestone” giving Iran important experience in overcoming the technical hurdles of uranium enrichment that can be transferred to larger cascades.

On Thursday, January 5, Condoleezza Rice warned Iran not to restart research and development work on uranium fuel, which can be used in nuclear weapons, and signaled that U.S. patience with European-led talks on Iran’s nuclear program was all but at an end.