** She Even Held a Fundraiser with Iranians Accused of being Pro-Regime Supporters! **

At one fundraiser Hillary discussed immigration and acknowledged the difficulties Iranian nationals have in obtaining visas to visit family members residing in America. “Our visa policy is not only unfair but it’s not good for America. We’re losing out by keeping out keen minds and ideas, which is having a negative impact on our competitive advantage.” (Payvand) 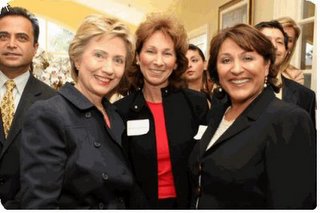 Here is a photo of Hillary at a fundraiser on Friday, June 3rd, 2005, at the home of Gita and Behzad Kashani in Los Altos Hills, California. (Payvand)

Senator Clinton has accused President Bush of downplaying the threat from Iran while she has been accepting money from supporters of the Iranian regime.

Wealthy businessmen Hassan Nemazee and Faraj Aalaei are associated with the American Iranian Council, a pro-regime anti-sanctions group. According to the Center for Responsive Politics, Namazee has contributed $4,000 to Clinton’s reelection while Aalaei has given $1,000.

The press describes their lobby this way “the American-Iranian Council [AIC], a pro-regime lobbying group trying to get Congress and the Bush administration to lift the trade embargo on Iran.” (Insight, 3/25/04)

Hillary Clinton is also raising money from Gati Kashani, another figure linked with the Mullahs.

On its website, the Iranian American PAC noted, “On Friday June 3rd, Iranian American friends of the Hillary Clinton Senate re-election campaign hosted a fundraising event in honor of Senator Clinton. The event took place at the home of Gita (pictured on the left) and Behzad Kashani in Los Altos Hills, California.”

Oh… and Hillary is not the only one… Senator Joseph Biden held a fundraiser at the home of Dr. Namazi-khah. The doctor is well-known in the Los Angeles area for his support of the ruling clerical regime in Tehran and is one of the regime’s leading unofficial lobbyists in America.

The event hauled in an estimated 30,000 dollars into Biden’s re-election coffers.

Here is more on the Biden event.

During the 2004 presidential debates, John Kerry insisted as president he would provide Tehran with the nuclear fuel it wants for a pledge to use it for peaceful purposes only. (How was this forgotten this past week? No wonder JFK has been silent on the latest developments in Iran!)

TigerHawk thinks it’s all about the greenbacks.