“I cannot explain how I feel to vote for the first time in my life. This is a great moment and I thank the Rulers of Abu Dhabi for giving us this golden opportunity.”

The UAE also announced that “Democracy” will be taught in the first grade! 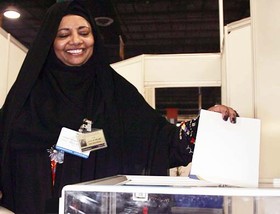 Salwa Salah Shaibani, one of the candidates, casting her vote during the elections to the Board of Directors of the Abu Dhabi Chamber of Commerce and Industry on Monday at the International Exhibition Centre. (Ravindranath/Gulf News)

The first ever Abu Dhabi Chamber of Commerce and Industry’s board elections took place today with much excitement:

‘The voter turnout is encouraging and we are optimistic of achieving the 25 per cent quorum,’ Mohammad Omar Abdullah, Director-General of the ADCCI, told Gulf News.

‘The attendance and the enthusiasm shows the interest of voters at this important election. We are confident that the elections will go on smoothly and successfully,’ he said.

Mohammad Abdul Jalil Al Fahim, the honorary chairman of the Al Fahim Group, described the election as a big step towards a democratic UAE. ‘We have been asking for this for the last 20 years and today it has become a reality. It started with the chamber?s board elections and next we have the federal national council elections. This is a test for things to come,’ he said.

The Chamber’s 50,000 members will elect 15 members of which 13 would be UAE nationals and two would be expatriates. There are three women candidates.

In a very positive sign of commitment to democracy, Democracy will be taught in the First Grade of Public Education in the UAE starting next year:

“We will start teaching students the definition and basics of democracy from Grade One,” Dr Obaid Al Muhairi, Director of Education and Curriculum Development Centre at the Ministry of Education, told Gulf News.

“We have a ready curriculum to build these skills from Grade One. Once students reach Grade Six, the education will be more practical. Students for example, will form a model parliament and learn the skills of debate and accepting others’ opinions,” he said. 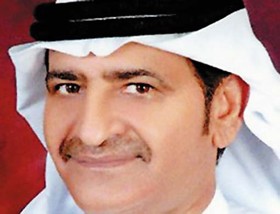 Academics in the UAE came out today and said that the current political reforms should guarantee universal suffrage:

They praised President His Highness Shaikh Khalifa Bin Zayed Al Nahyan’s promise that electing half of the FNC members will be followed by many steps towards more reform and public participation, which will eventually lead to general legislative elections.

“But the next Federal National Council will surely look into wide-ranging constitutional changes leading to a fully elected and powerful parliament. This parliament will act as the development engine for other institutions in the country,” he told Gulf News.

The UAE is moving toward “a true and peaceful democracy, without shedding blood or committing mistakes of others,” said Dr Abdul Razzaq Al Mudhreb, associate professor in philosophy of science at UAE University.

Big Hat Tip to UAE Expert John B. Chilton for this exciting news!

Previously:
Another Democracy in Mideast, UAE to Hold Elections!