While Iraq made history on Thursday with successful strides towards democracy, its neighbor Iran made its own kind of history. In the last 24 hours, Iran:

* Promised a swift & devastating response to any Israeli attack.
* Blamed Saddam Hussein’s downfall on “Zionists”.
* Was accused by US Top Commander of influencing Iraqi vote.
* Said a historical incident (holocaust) has occurred. Correct or not correct.
* Was charged with buying 18 missiles from North Korea
* And, earlier this week, met with Hamas Leader Mashal for talks on the “future” of Israel in Tehran.

The spiritual rulers of Iran continue to escalate threats. 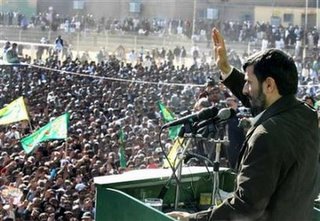 Iran yesterday warned its response to any attack by arch-enemy Israel would be “swift and destructive,” amid rising tensions over IranÂs stance towards the Jewish state.

“The policy of the Islamic Republic of Iran is completely defensive, but if we are attacked, the answer of the armed forces will be swift, firm and destructive,” Mostafa Mohammad Najjar was quoted as saying by the official IRNA news agency.
He was responding to a question about IranÂs reaction in case of an attack on its nuclear facilities, already under scrutiny as international unease grows over the Islamic RepublicÂs nuclear intentions.

“The doomed fate of (Iraqi ex-president) Saddam (Hussein) must be a lesson for officials of the usurping Zionist regime,” Najjar added.

“A historical incident has occurred. Correct or not correct. We don’t want to launch research or carry out historical investigation about it,” he said without elaborating.

Not much of an apology! 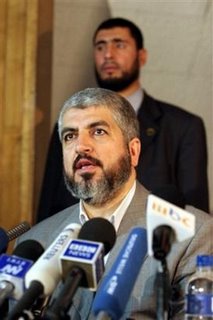 The political leader of the militant Palestinian Hamas group Khaled Mashall, speaks with media during a press conference in a hotel in Tehran, Iran, Thursday, Dec. 15, 2005. (AP Photo/Vahid Salemi)
The top US Commander in Iran accused Iraq of meddling with the Iraqi election:

The top US commander in Iraq Friday accused Iran of meddling in Iraq’s elections, saying it invested heavily in political parties in the south and seeks to influence the formation of a new government.

“I don’t have hard, smoking gun-type evidence, but the intelligence we have tells us they invested heavily in political parties supportive of Iran in the south,” said General George Casey, who commands US forces in Iraq.

“And I believe they will continue to attempt to influence the formation of this government over the coming weeks, to get a government that they believe is supportive of their interests,” he said.

“That is worrisome and it is a challenge for us,” he added.

Hamas leader Khalid Mashal was welcomed into Tehran earlier this week for talks with the Supreme Mullah Khamenei for a frightening dialogue on Israel:

Khameini stressed that the only way to win liberation for Palestinians was to unite and adhere to Islam’s statutes.

The Iranian leader also told Mashal that Palestinian resistance and struggle was the sole reason for gains made by the nation in the face of Israeli oppression, particularly the withdrawal from the Gaza Strip and from Lebanon.

He added that experience had proven that negotiating with Israel would not help forward the Palestinian cause.

“Intifada proved that the Palestinian nation is mightier than the Zionist regime and America”, Khamenei said, according to IRIB. He also noted the failure of the American regime in the Middle East region.

Mashal praised the Supreme Leader and thanked him for Iran’s support of the Palestinian cause. He said that he regretted that other Islamic governments do not dare adopt similar positions as those of Iran.

The two spoke of Palestinian developments, and Mashal stressed the Palestinian people have grown more committed to continue resistance.

Clearly, the two leaders are in agreement on Israel’s future. 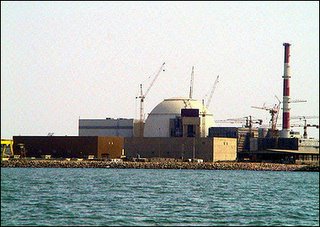 General view of Iran’s nuclear reactor in Bushehr. European and Western diplomats fear that next week’s planned nuclear meeting with Iran is all but futile but could help in getting Russia to back a hardline against Iran’s atomic ambitions.(AFP/IAEO/File)

Iranian President Mahmoud Ahmadinejad also met with the Hamas leader while he was in Tehran. The exchange is even more threatening:

According to a report by Presidential Office Media Department, President Ahmadinejad during the meeting stressing that Palestine issue is related to the entire Islamic Ummah (nation) reiterated, “We are all obliged to heed our religious and divine responsibilities in offering services to the Palestinian movement.”

The president noted out, “Resistance is the secret for embracing victory and the main ideal of the Islamic World is the liberation of the entire land of Palestine, the repatriation of all Palestinian refugees to their motherland, and the establishment of a popular political system in Palestine.”

He said, “US policies have proved to fail in dealing with regional problems, and most obviously in Iraq, and today the regional nations are witnesses to the emergence of a wave of objections and opposition against the US policies pursued in the regions, in Asia, and Europe.” Khalid Mashal added, “Hamas is committed to insistence on the need to restore the natural r
ights of the Palestinian nation and the liberation of the entire occupied lands, including the occupied Holy Qods.”
He said, “We do not recognize the legitimacy of Israel and are committed to continuation of resistance movement aimed at ending occupation and repatriation of all refugees.”

On Friday the The German media claimed on Friday that Iran has bought 18 BM-25 missiles from North Korea which the Islamic Republic wants to transform to extend their range.

The EU condemned Iran on Friday with very strong statements.

Freedom for Egyptians says that Iran is not only intimidating Israelis but Egyptians as well.