Irani Opposition protesters gather in Vienna before EU nuclear talks with Iran. Opposition leaders are accusing Iran of hiding an extensive network of underground tunnels for a nuclear weapons program. 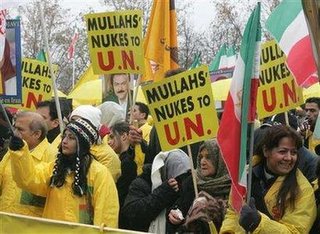 Several hundred demonstrators of the oppositional National Council of Resistance of Iran protest in front of the U.N. building in Vienna November 24, 2005. The council called on the U.N.’s atomic watchdog to inspect an extensive network of tunnels which it says the Islamic Republic has built to conceal a clandestine nuclear weapons programme. (REUTERS/Herwig Prammer)

An Irani Opposition group in Vienna says that the mullacracy has been hiding its nuclear program in secretive tunnels for several years:

Underground facilities have been built in at least 14 sites near Tehran, Isfahan, and Qom, Mohammad Mohaddessin, chairman of the opposition National Council of the Resistance, said at a news conference in Paris, citing what he called “reliable sources within the clerical regime.”

The allegation comes a day before talks between Iran and the EU, represented by France, Germany and the U.K., open in Vienna.

The Iranian exile group also claims that Russia provided the regime with technology.

Opposition members also have specifics on the secretive tunnel construction including who is in charge of the program:

All the tunnel construction was supervised by the Iranian Revolutionary Guards Corps and by General Hassan Firoozabadi, head of the Joint Chiefs of Staff of the Iranian army; building started as early as 1989, Mohaddessin said.

Some tunnels have been dug into mountains and then separate into several smaller cavities. Some go down vertically into the ground and branch out at a certain depth. Others are trenches cut into the surface of the ground and covered with cement and camouflaged to resemble hills, Mohaddessin said.

Lead has been used to line the tunnels to stop any leakage of radiation and sound to the surrounding environment and to prevent detection by IAEA investigators, he said.

A tunnel complex which includes a production line for ballistic missiles which could carry nuclear warheads, is located in the Khojeer region, southeast of Tehran, Mohaddessin said. It consists of dozens of secret tunnels; the main one is a kilometer (0.6 miles) long and 12 meters (39 feet) wide. The tunnel subsequently branches out into five other 500 meter-long tunnels.

Earlier this week Russia announced that it was ready to supply Iran with anti-aircraft systems.