President Bush reminds the world that while the path toward Iraqi democracy has been somewhat rocky, so was the path to American democracy more than 200 years ago. 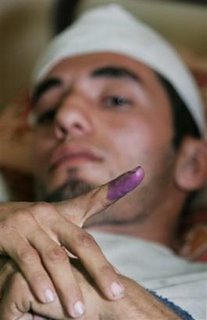 An Iraqi patient shows his finger tainted with ink as mark for already casting his vote at the Central Yarmouk Hospital in Baghdad, Iraq, Monday, Dec. 12, 2005. Iraqis began voting Monday in hospitals, military camps and prisons, ahead of general elections to be held Dec. 15, while the estimated 1.5 million voters living outside the country can cast their ballots at polling centers in 15 countries. (AP Photo/Hadi Mizban)

Iraq the Model has a terrific piece on how the elections are going so far. More than 20 lists and parties sent hundreds of thousands of messages via cell phones throughout the country. Expected turnout is at 68%!

I wish that someone would make a video of Iraqis voting so that it could be played in emergencies… like when certain friends or family stop by. 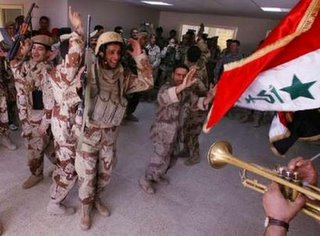 Iraqi soldiers celebrate after voting in the national election, at Kirkush Military Training Base, 65 km (43 miles) northeast of Baghdad December 12, 2005. Voting began at Iraq’s military bases, hospitals and prisons on Monday, with security forces, detainees and the ill kicking off the country’s first elections for a full-term parliament since the fall of Saddam Hussein. (REUTERS/Bob Strong)

It was nice to hear President Bush clear up the comparison of Iraqis to “American pioneers” in his speech today that was started when the Left started calling the terrorists “Minute Men”. 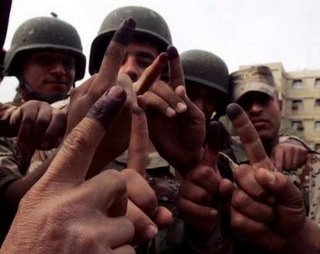 Members of the Iraqi National Guard show their fingers marked with indelible ink after voting ahead of a historical parliamentary election on Thursday outside their barracks in central Baghdad December 12, 2005. Iraqi security officials are bracing for an increase in violence in the days and weeks after what they believe will be a relatively safe and secure election day, a spokesman for the Ministry of Defence said on Sunday. Iraq’s interim government has begun a huge security operation ahead of Thursday’s vote to choose the first full-term government since the fall of Saddam Hussein, with a nationwide ‘lockdown’ beginning on Wednesday. (REUTERS/Thaier al-Sudani)

As President Bush speaks in the cradle of US democracy, Philadelphia, Iraqis head again to the polls. America’s ambassador to Iraq says that Sunnis now believe that their needs can be met politically:

U.S. Ambassador to Iraq Zalmay Khalilzad told CNN that “Sunnis seem to be developing confidence in the political process. They believe that their grievances can be dealt with politically.”

Khalilzad add that having Sunnis involved in the government could result in “isolating the terrorists,” many of whom are Sunnis, and lead to a reduction in violence in Iraq.

U.S. and Iraqi officials have increasingly said that the insurgency will not be defeated militarily, but through political means.

Here is the full transcript of the president’s speech on freedom, today.

Pajamas Media points to a poll today from Great Britain that shows that the Iraqis are optimistic about their future. (via Instapundit) 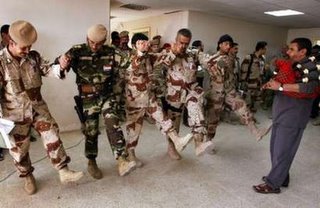 Michelle Malkin has a roundup on todays historic vote from Iraq.

But some in Iraq are not so happy, as Gina Cobb notes.

TigerHawk is confused.
The Anchoress writes that today is a good day for two reasons.
Texas Rainmaker comments on ABC’s surprise to recent Iraqi news. I bet they aren’t the only ones!
Driftwood wonders about the democrat’s redeployment.