A Full Year of Osama Silence

It’s been over one year since Osama Bin Laden has been heard from. 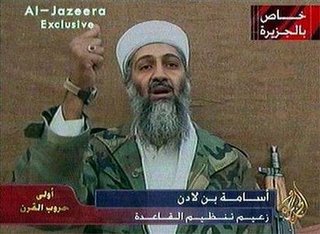 Osama Bin Laden is seen gesturing during a videotaped statement broadcast on November 3, 2001. The United States told Saudi Arabia more than three years before the September 11 attacks that Osama bin Laden might be targeting civilian airplanes, according to a newly declassified State Department cable. (REUTERS/al-Jazeera TV)

The US says it is skeptical of the news this week that an Afghanistan news station has received an Osama Bin Laden tape with a special appearance by Mullah Omar:

He hasn’t been heard from in more than a year, but one news site reports that it has obtained a new tape of al Qaeda leader Osama bin Laden.

But U.S. officials are skeptical of the report, CBS News reports.

The story from Pajhwok Afghan News, dated Tuesday, describes a new 30-minute tape with a message from Taliban commander Mullah Dodallah and the al Qaeda leader, according to the IntelCenter, a U.S. government contractor that does work for intelligence agencies.