Angry that the trains were running late, and feeling the effects of discrimination and poverty, Africans set trains on fire in Soweto! 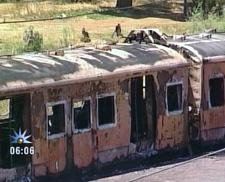 The rampage began at Midway station at about 7.20pm on Wednesday night when commuters set fire to 13 coaches. An hour later, passengers at Nancefield torched a further 12. Then at Kliptown station, at 9.15pm, three more were set alight.

No one was injured, but late last night Metrorail was in the process of assessing the extent of the damage.

Twenty seven cars were lit up at four different stations:

Angry commuters set fire to 27 carriages on four Metrorail trains at three Soweto stations last night. The commuters set alight 16 coaches at Midway Railway Station on the Lenasia-Soweto border. Another eight coaches were destroyed at Nancefield Railway Station on a 15-coach train bound for Vereeniging, and three more on a train of 12-coaches in Kliptown.

The incidents followed Tuesday’s burning of four carriages at the Residentia Railway Station in Vereeniging by commuters irate at an absence of train services at the Vereeniging, Stratford, Residentia and Lenasia stations.

The acts of arson will no doubt have conductors looking deep inside at how their actions have a direct affect on commuters.