Muqtada al-Sadr, the militia leading cleric and son of an Iraqi Grand Ayatollah, made his first public appearance on May 16th since the bitter defeat of his Mahdi Army by Coalition forces in August of last year. Initially, on his return to public life, Muqtada tried to paint himself as a peacemaker… 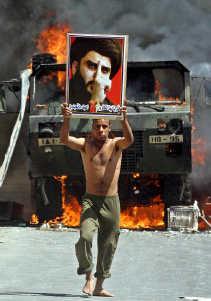 UK officials have hinted at an Iranian link before, this is the first specific allegation to be made.

It could be that they feel there is nothing to lose right now, given that diplomatic relations are already low following the breakdown of talks over Iran’s nuclear programme, the BBC’s Paul Reynolds says.

The official, who spoke on condition of anonymity, said the technology had come from Hezbollah in Lebanon via Iran and produced an “explosively shaped projectile”.

He said that dissidents from the Mehdi army, a militia controlled by the radical Shia cleric Moqtada Sadr, were suspected of carrying out the attacks.

One of their leaders, Ahmed al-Fartusi, was arrested by British forces recently and was “currently enjoying British hospitality”, as the official put it.

Sunni-ruled Saudi Arabia has accused Shia Iran of meddling in the affairs of the violence-ravaged country, but Tehran has denied the charge, which also drew a scathing attack on Saudi Arabia from an Iraqi Shia minister.

The surprise postponement of Mottaki’s visit on Wednesday was reported by Saudi Foreign Ministry sources although Iranian officials could not be reached for comment.

Saud’s comments also drew a harsh attack from Iraq’s interior minister, who said Iraqis would “not accept a Bedouin on a camel teaching us about human rights and democracy.”

Interior Minister Bayan Baqer Sulagh said the oil-rich Sunni-ruled kingdom had several problems of its own to take care of. “Saudis should first allow women to drive, as is the case in Iraq,” he said, adding that “four million Shia live like second-class citizens in the Saudi kingdom.”

“New explosive devices used against coalition forces in Iraq lead us either to Iranian elements or to Hezbollah.”

“We cannot be sure,” Blair told a news conference, but “there are certain pieces of information that lead us back to Iran.”

“What is clear is that there have been new explosive devices used, not just against British troops but elsewhere in Iraq,” Blair said during a news conference with Iraqi President Jalal Talabani.

“The particular nature of those devices lead us either to Iranian elements or to Hezbollah, because they are similar to the devices used by Hezbollah.”

“However, we cannot be sure of this at the present time.”

A senior British official first made the accusation against Iran at a Wednesday briefing, saying Britain believed Iran’s Revolutionary Guard supplied that technology used to kill eight British soldiers in incidents over the summer.