THE ANDIJAN MASSACRE TRIAL HAS STARTED IN UZBEKISTAN,
OFFICIALS ARE TRYING 15 LOCAL BUSINESSMEN FOR THE MASSACRE,
VIDEO HERE 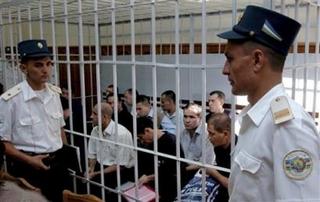 Fifteen men, most in their 20s and 30s, sit in a metal defendants’ cage in the courtroom in Tashkent, Uzbekistan, Tuesday, Sept. 20, 2005. Prosecutors on Tuesday painted a detailed picture of an alleged Islamic extremist conspiracy as they opened a trial against the first group of accused plotters behind an uprising in eastern Uzbekistan that ended in a bloodbath. (AP)

The strange show trial of 15 men for the Andijan Massacre is underway. The government is painting the picture of an Islamic uprising behind the attacks on a square in Andijan that killed up to 1,000 Uzbekis in May. The few observers that were able to tell their stories to the West told a completely different story, where government forces surrounded shot randomly into a crowd of men, women and children at a peaceful rally in the town square:

The fifteen stand accused of terrorism, possession of illegal weapons possession, murder of civilians, officials and members of the security forces, hostage-taking and freeing of hundreds of prisoners in relation with events in Andijan province last May, Deputy Prosecutor General Anvar Nabiyev said.

The charges relate to the bloodshed that began on the night of May 12 in and around Andijan city, close to the Central Asian republic’s border with Kyrgyzstan, and continued for more than 24 hours.

The Uzbek authorities say that 187 people died as insurgents stormed a jail, but outside observers say that the Uzbek police fired on civilians, killing many more.

The defendants, all men under 50, include three citizens of Kyrgyzstan.

They also include a number of men whose jailing had sparked days of protests in Andijan prior to the massacre. 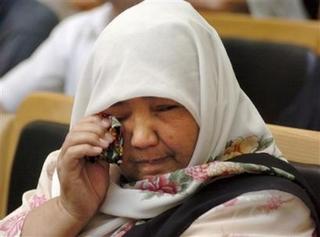 Makhbuba Mamatkulova, widow of former hostage Mukhammad Mamatkulov who died in the attacks, cries at a courtroom in Tashkent, Wednesday, Sept. 21, 2005. The first of 15 defendants on trial for alleged involvement in a rebellion in Uzbekistan began to give testimony Wednesday, readily confessing to state charges of launching an Islamic mutiny. In what appeared to be a carefully orchestrated replay of prosecutors’ arguments, Muidin Sobirov, 42, said contritely that he had prepared a military plan for the May 13 uprising in the eastern city of Andijan, and that the conspirators had received funding from abroad. (AP)

The 15 men pleaded guilty on Tuesday in what appeared to be a carefully scripted production. Human rights groups are rightly pressuring the US and EU to condemn the coverup of the massacre by the government:

Western human rights officials, meanwhile, released a report alleging that police have engaged in a brutal intimidation campaign since the May 13 uprising in the city of Andijan, including forcing people to confess that they belonged to extremist religious groups.

The 15 men sat impassively in a metal defendants’ cage in the courtroom as a succession of blue-uniformed prosecutors read the state’s arguments. The defendants stood, one by one, to confirm their guilty pleas.

The specific charges vary among the defendants, ranging from rioting to murder and belonging to illegal groups.

The prosecutors alleged the revolt’s participants had planned to create an Islamic state, first in the restive Fergana Valley region where Andijan is located and then across Uzbekistan. They said they had been trained in neighboring Kyrgyzstan and received funding from abroad — including from supporters in Russia.

Amnesty International, to their credit, is pressing for an independent international investigation into the massacre.

According to eyewitness testimony, security forces fired indiscriminately into crowds of thousands of demonstrators gathered in the centre of Andizhan and as they fled. The government’s version of events differs significantly to those testimonies. It maintains that the security forces did not kill any civilians and that all those civilians who lost their lives were killed by armed “terrorists”.

The government has stated that 187 people were killed and that many of them were “terrorists”, although it has yet to publish the names of those who died. Some people have been unable to find out what happened to their missing relatives. According to unconfirmed reports, the bodies of people killed were removed from the city and secretly buried in unknown locations.

A man who was still looking for his son two months afterwards told Amnesty International: “He is not in the refugee camp and he is not in the detention centre either. Where can I go ask? We hope he is still alive.”

Nathan Hamm, the Central Asian expert at the Registan, is reporting on the trial. Nathan also commends the US Senators who are questioning the current Pentagon actions that appear to be overlooking the massacre.