** With the next draft on the Oil for Food Scandal due out on Wednesday, Kofi is bracing for more bad news. **

KOFI ANSWERS QUESTIONS ON OIL FOR FOOD, JOHN BOLTON, HIS SON KOJO,
VIDEO HERE
(entire video clip 7 minutes but well worth the watch for the information shared)
HERE is the full text of the BBC interview.

A few of the major points discussed:

* A UN Tax on the GNP of “rich” countries!
* John Bolton has recommended 750 changes to a new proposal
* Kofi says the US must give and take with “all” countries
* Kofi repeats how the US must remember there are 190 other countries in UN
* Did I say a .7% tax on GNP for development aid!
* On Kojo, it’s unfortunate… it’s painful…the whole process is painful
* He wishes the UN were never given the Oil for Food Program 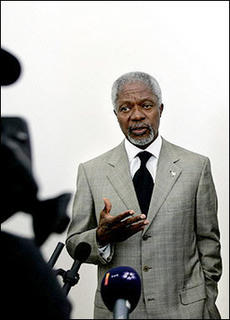 Kofi Annan says he wishes the UN had never been asked to take part in Iraq’s oil-for-food programme as he braced himself for the results of the most detailed report yet into the scandal. (AFP)

Kofi says it was “unfortunate” the US waited until the last moment to propose its 750 changes (not true!) to the final document that would overhaul the UN:

He said in a British Broadcasting Corp. interview it was “unfortunate” that the United States waited until just last month to propose hundreds of amendments to a final document for world leaders to consider adopting. Annan said it opened “the floodgates” to other amendments and changed the dynamics of the negotiations.

U.S. Ambassador John Bolton has said Washington had been making similar proposals since June to General Assembly President Jean Ping, who has been overseeing the document’s preparation.

Among the issues: a Human Rights Council with more authority to replace the discredited Human Rights Commission; a Peace building Commission to help nations emerging from conflict; new responsibility for governments to protect civilians facing genocide and war crimes; disarmament and nonproliferation; overhauling U.N. management; and steps to fight poverty.

The United States and an overwhelming majority of countries support a new Human Rights Council, although human rights organizations say about 15 countries — led by Cuba — were blocking changes.

John Bolton is turning out to be as critics feared he might be. 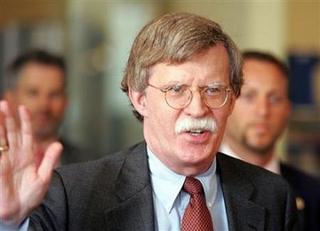 U.S. Ambassador John Bolton insisted on Wednesday that Washington was not ignoring U.N. development goals but trying to make sure the Bush administration was not committed to a precise target for foreign aid when world leaders meet at a U.N. summit.

Secretary-General Kofi Annan had hoped a September 14-16 summit of 175 leaders would agree on how to revitalize the United Nations and map out new approaches to the international system. Rich nations were to agree on a development agenda in exchange for support on Western demands for human rights and internal management reforms. (What is that? Does the US have to pay the UN to promote human rights and democracy?) But six months of discussions have brought out sharp divisions on how to tackle poverty, human rights, terrorism (I don’t believe the UN has even agreed on the definition for terrorism, yet!), intervention in case of genocide and U.N. internal reforms.

“I am telling people loosen your ties, fire up the coffee pots, get ready for the weekend,” Bolton told reporters during a break in negotiations. “We’ve got a lot of work to do.” In this photo, Bolton, waves to the media at the United Nations Headquarters in New York August 31, 2005. (Reuters)

Experts say that this new report due out this week is going to give a “Body Blow” to the UN.