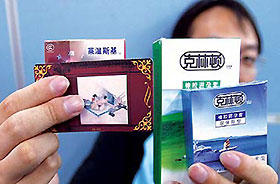 China is set to release the Bill and Monica condoms.

The former US president is known for many things among the Chinese public, including his sexual peccadilloes and promotion of AIDS awareness and prevention.

But he may be surprised to know that his monicker is now being used as a brand name by a condom manufacturer in southern China – together with that of Monica Lewinsky, the White House intern with whom he had an affair.

Guangzhou Haojian Biotech Company recently announced the launch of the Clinton and Lewinsky brands of condoms. General manager Liu Wenhua proudly declared that his was the first company in China to have registered an international celebrity’s name as a trademark.

No, he did not need to pay a single penny to use the names, he explained, because these are just “ordinary Western names” and having them as trademarks would not constitute an infringement on intellectual property rights.

Both brands are for males. (Huh?)

Update: (September 22)The AP is carrying this story today.

Update 2: (September 22, 2005) Ann Coulter has suggestions for this new product line from China today in her column.