Iran’s most prominent political prisoner has ended his hunger strike! 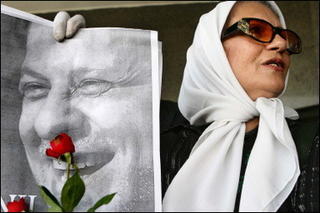 An Iranian woman brandishes a picture of journalist Akbar Ganji during a protest outside Tehran’s Milad hospital 11 August. (AFP)

The wife of Akbar Ganji is saying that her husband, the Iranian political prisoner, has ended his hunger strike!

“I saw him last night. He has ended his hunger strike. He is fairly well,” Massoumeh Shafii said in a brief statement.

The 46-year-old was sentenced to six years in prison in 2001 after he wrote articles implicating several regime officials in the murders of opposition intellectuals and writers.

He began refusing food on June 11 to protest the conditions of his detention and in a bid to secure his unconditional release. The judiciary insisted last week that the strike had ended, but no independent confirmation was available given that family members and lawyers were barred from visiting him.

Ganji was transferred from ICU to the general ward on Saturday.

On Friday health officials said Ganji had been working with the medical team and expressed hope that his condition would return to normal.