Iran is battling deadly protests in the north and south. 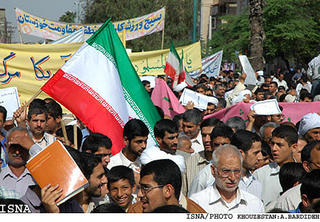 Southern Iran also experienced deadly protests and rioting in April. The area is a hotbed for ethnic unrest.

Iranian authorities cracked down on protesters today in the southwestern oil province of Khuzestan, home to most of the Islamic Republic’s Arab minority. There are reports that four people may have been killed in the violence:

An Iranian official said police had restored order after 12 arrests, but a leader among the Arab protesters said four protesters were killed and many injured in clashes with authorities.

Iran’s Interior Ministry told Reuters it had no immediate information on deaths and would check with security forces.

Unrest among the Arab minority flared in April, when five people were killed and about 200 arrested. The street fighting was kindled by rumours that Tehran was planning to force ethnic Arabs to relocate.

The protests had a strong ethnic tone with people hanging Khuzestani Arab flags from buildings.

On Monday a Kurdish protester was shot and killed in northeren Iran. Kurdish Iranians were protesting the brutal killing of a young Kurdish acivist earlier in the month:

A Kurd named Umer Emini was killed and tens of people were wounded when Iranian soldiers tried to stop the protest which started at 21:30 (9:30 pm GMT+3:30) led by the Kurdish party PJAK in support of the uprising in Mahabad. An unknown number of people were arrested.

The uprising in Mahabad started after news that Iranian soldiers had on July 9 brutally killed the young Kurdish activist Shivane Qadri in the district of Pisttep in Mahabad. It escalated when grotesque pictures of Qadri’s tortured body was published by Kurdish news agencies. Two Iranian soldiers were killed during the protests.

Protests are still raging on in eastern Kurdistan (Iran).

Kurdish journalists report that three people were killed on Monday and seven died in previous days.

Kurds are saying the unrest is a sign of frustration over the denial of minority rights in Iran.

The northern city of Shino is protesting the oppressive attitude of the Iranian state forces:

The oppressive forces of the Iranian regime have shot at the demonstrators and two of them by the names of Hayder Abdullazada and Homer Emini the son of Shehk Mohammed have unfortunately been made martyrs and an unknown number of the demonstrators were also wounded.