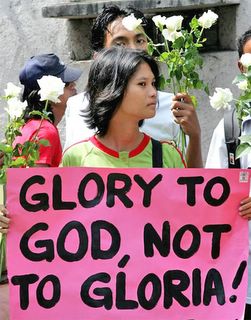 A Philippine protester picketing the Catholic Bishops Conference in the Philippines today.

Former President Corazon Aquino, a devout Catholic, who recently asked President Gloria Macapagal Arroyo to step down over allegations of election fraud, told a crowd at Mass that she will continue praying for the president and asked Filipinos to pray for her so that “we can have a swift and just resolution to our present political crisis.”

The local papers are clear about whose side they are on:

“Opposition shows muscle in biggest quit rally yet,” declared the Daily Tribune, an anti-Arroyo paper, which in an editorial accused the embattled president of “try[ing] desperately to hold on to power” and advised her to start packing her bags.

“Protest rally fizzles out” read the headline in the pro-government Manila Times, which along with the Manila Bulletin said the organizers had failed to attract the one million protestors they had promised. 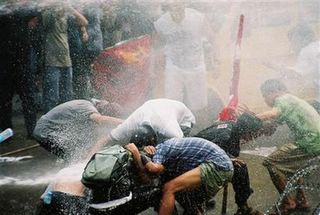 Protesters in the Philippines are getting some push back from the government.

The Catholic Bishops’ Conference of the Philippines has remained neutral so far:

Nueva Caceres Archbishop Leonardo Legaspi, a former CBCP president, has also been quoted as saying resignation of President Arroyo was “very alive in the minds of individual bishops but did not actually surface during the actual deliberation.”

Their statement on Sunday read, “in the spirit of humility and truth, we declare our prayerful discerned collective decision that we do not demand her resignation,” and added that “neither do we encourage her simply to dismiss such call from others.”