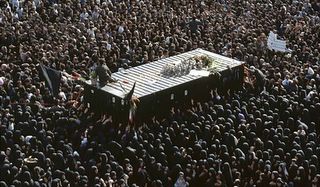 One of the funeral processions of Ayatollah Seyyed Ruhollah Khomeini after his death on June 3, 1989.

The chaos at the funeral of Ayatollah Khomeini in June 1989 describes one of the most gruesome scenes of mourning in modern history:

A crowd of more than 9 million Iranians gathered around the burial location which was not supposed to be revealed at the time. Khomeini’s first funeral was aborted by Iranian officials, after a mob of thousands stormed the funeral procession, nearly destroying Khomeini’s wooden coffin in order to get a glimpse of Khomeini’s body. At one point, Khomeini’s body actually fell to the ground, as the crowd attempted to grab pieces of the shroud. Over 10,000 people were injured. A second funeral, under much tighter security, buried Khomeini in a steel casket, surrounded by heavily armed security personnel.

Each year the anniversary of his death is celebrated but not this year as Iranians massively boycotted the commemoration ceremonies (via Enough! ):

Iranians boycotted massively the commemorative or official ceremonies marking the 16th anniversary of the death of Rooh-Ollah Khomeini. Millions stayed home or used the official holiday in order to go to friendly or familial parties or simply to get out of cities in order to have a moment of joy instead of the regime’s promoted cult of death and mourning

The Islamic regime and its leadership faced another fiasco and show of popular rejection of the Islamist ideology and their illegitimate regime. They had to bring in, as they had expected and planned, the same usual professional participants composed of thugs, security and military agents, afraid governmental employees, some elementary or secondary school children or members of the so-called Bassij students (Para military force deployed in Iranian universities).

In Tehran, Capital of the Islamic republic with over 14 million of inhabitants, only less than a hundred thousand of professional or forced demonstrators participated. Hundreds of buses had transferred most of them from various cities in order to able the regime to offer its needed show of popular support.

Even the free food and promises of some welfare were not able to mobilize despite the fact that more than 70% of Iranians are living under poverty level based on regime’s official sources.

Apparently not all Iranians think so highly of the late Ayatollah (from Enough!):

For over 90% of Iranians of our days, Khomeini’s name and dark legacy are incarnations of evil, cataclysm, destruction, blood and misery. They know him as the messenger of Satan rather than the God he claimed to represent.

Many compare him to Zahaak, a legendary tyrant of the famous “Epic of the Kings” written by the famous nationalist poet Ferdowsi who was living in 7th century.