(Jimmy Carter weighs in on the video) 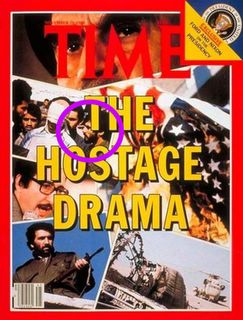 Was Ahmadinejad (circled in purple) pictured on the November 10, 1980 cover of Time magazine?

Bush is seeking answers from Iran on whether the man seen in pictures and identified by at least 6 former Iranian hostages is indeed the new president, Ahmadinejad:

US President George W. Bush called for answers after former hostages implicated Iran’s hardline president-elect, Mahmood Ahmadinejad, in the dramatic 1979 takeover of the US embassy in Tehran.

Five survivors of the 444-day siege said they remembered seeing Ahmadinejad, and one even recalled him as “cruel,” while Iranian veterans of the standoff flatly denied that he was involved.

“I have no information” to confirm or refute the allegation, Bush said. “But obviously his involvement raises many questions, and knowing how active people are at finding answers to questions, I’m confident they’ll be found.”

White House spokesman Scott McClellan told reporters that the president, who had been speaking to four news organization including AFP, was referring to Ahmadinejad’s “reported involvement” and was not confirming the accusation.

One former hostage, Don Sharer, who served as the embassy’s naval attache at the time said:

He was 99 percent sure Ahmadinejad was involved.

“In one incident he just called (Army attache Col. Charles Scott) pigs and dogs and we deserved to be locked up forever,” he said. “When you’re placed in a life-threatening situation of that nature, you just remember those things.”

“If he died his hair blond and shaved his beard I could still spot him,” former hostage Chuck Scott told CBS News.

Two leading figures in the Iranian Embassy seizure said that the new leader was no hostage taker. 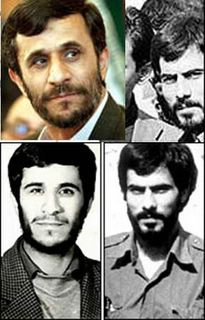 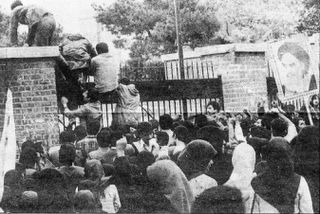 The White House said that they are probing into President Ahmadinejad’s past to see if the new president was indeed climbing embassy walls 25 years ago.

A St. Louis is man is now one of six to say that he believes that Ahmadinejad was one of his captors.

Meanwhile, Ahmadinejad continued to receive congratulatory calls from world leaders on his landslide win. On Tuesday Uzbekistan President Islam Karimov called to extend his congratulations. Uzbekistan is still recovering from the massacre in May when governmental forces opened fire on demonstrators in Andijan.

Some observations:
– the above video claims that President Ahmadinejad wanted the Iranians to take over the Soviet Embassy as well.
– Wouldn’t you think that the US would know more about this guy by now? He had been running a campaign for months now.
– Does the White House know something already? Would it be odd for Bush to speak out if he was just speculating?
– The Iranians admit he belonged to the activist group that took over the embassy but not the same branch.
– Iran Focus says they have a contact inside the mullacracy who told them about the new president’s past.

And, Little Green Footballs, The Jawa Report and Captains Quarters have been following the story.

Update: (Friday AM) Instapundit adds that “if he weren’t a hostage-taker, he’d certainly be just as bad anyway”. And, even Jimmy in the above video looks a bit miffed that this story keeps coming back to bite him!

Bill Hobbs is also speculating and has more on the story.

Update: Via Rusty Shackleford and an Anonymous Reader and The Jawa Report 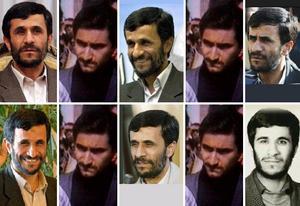 The word is now that Ahmadinejad is the more manicured terrorist in the photo, the one with the turtleneck. This is also reported here and here… Still waiting on more work from the administration. But, at least six of the former hostages are saying that Ahmadinejad was one of their captors.

…Western intelligence sources have told United Press International that the new president served in the Al Quds Battalion of the Pasdaran, which was responsible for operations abroad. (Al Quds is the Arabic na
me for the city of Jerusalem, and signals strong commitment to the Palestinian cause.) The sources add that he is believed to have participated in operations in western Europe, saying in particular that he was one of a number of Iranians suspected of involvement in the killing of three Iranian Kurdish leaders in an ambush on the outskirts of the Austrian capital Vienna. This is a brief qualifications of the Iranian president.