IT’S BEEN A ROUGH MONTH FOR GERHARD,
EVEN OLD PAL JACQUES COULD NOT HELP OUT, VIDEO HERE

The election loss in late May in the traditional Social Democrat stronghold of North Rhine-Westphalia was the worst blow.

German Chancellor Gerhard Schroeder is meeting with President Bush in a visit shortened by election-year pressure and overshadowed by the possibility Germany will have a new, more pro-American leader this fall. 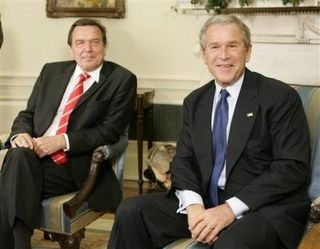 Gerhard will not be staying as long as he would like since he is lagging a bit in the polls in the upcoming election in September:

The two will discuss Germany’s program to train Iraqi police outside Iraq, European efforts to rein in Iran’s nuclear program and proposals for reworking the U.N. Security Council.

But expectations for the meeting were scaled back because Schroeder is facing an early election this September. His Social Democratic party lags 17 percentage points behind the conservative opposition in the latest polls, and he lopped a day off the trip due to his tightened schedule, eliminating a visit to California.

Schroeder arrived in Washington Sunday evening. After conferring with Bush and joining him at a news conference and lunch Monday, he was to address the U.S. Chamber of Commerce and meet with members of the Senate Foreign Relations Committee and then head home in the evening.

Let’s hope that the US Chamber of Commerce don’t take too much of Gerhard’s speech to heart!

The current German economy is in quite a “quagmire”, suffering from the highest unemployment rate since Hitler took over (notice how Hitler was used in this sentence… it was not an attempt at name-calling someone a mass murderer) and stagnant economic growth. And, with no new war on the horizon, Gerhard will not be able to use the ol’ “hating the war-mongering US” too well as a platform piece like last time when he squeaked out a win.

Some sad news for Gerhard and America-haters…

But Mr Schroeder has lost terrain in Germany.

He has recently made a call for early general elections after suffering a heavy blow in local polls.

She is expected to secure an easy victory when Germans go to the polls, presumably in mid-September.

“I think that the Bush administration, like everybody else, has written Schroeder off as basically a lame duck whose time is very limited now,” an expert on US-German relations at John Hopkins University, Stephen Szabo, told AP news agency.

I wonder if this bit of news (via Davids Medienkritik) came up in the discussion while Gerhard was in town?