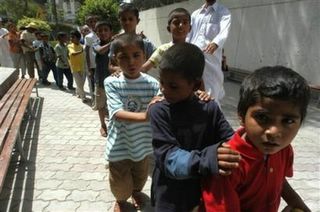 No relatives showed up to greet them back home…

There were no relatives or friends at the airport to greet the boys, perhaps out of fear of being implicated in their trafficking. They had previously been used to sheltering under makeshift tents or in comfortless rooms close to sheds where racing camels were kept.

Their days as child camel ‘jockeys’ were over and they had spent the last two days filling in colouring books, completing simple puzzles and looking at picture books in a hostel of the Child Welfare Protection Bureau (CWPB). Sadly, almost all the children, aged between three and 12 years old, were illiterate and could not read the stories that accompanied the pictures.

All of the boys had worked as camel jockeys in the Gulf with many of them being sold to agents who smuggled them out to Dubai and Abu Dhabi in the UAE, or other Gulf states by middle men. Others seem to have been runaway children who had been kidnapped and whisked away.