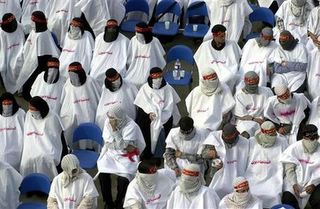 More than 200 young men and women presented themselves Thursday as volunteers to carry out suicide bomb attacks against Americans in Iraq and against Israelis.

The meeting was organized at Behesht-e-Zahra cemetery, south of Tehran, by the Headquarters for Commemorating Martyrs of the Global Islamic Movement, a shadowy group that has sought volunteers for attacks in Iraq and Israel since last year.

It was the third such ceremony that the group has held, but there has been no independent confirmation any of its volunteers has carried out a bombing.

If I read that their parents were there to take pictures, I will really get the creeps. God bless!

Hat Tip to “Soldier’s Dad” for pointing this article out at Hammorabi.

Free Republic reported on this earlier in a December recruitment drive.

And… Iranian Officials have tried to distance themselves from the group… but, they haven’t tried that hard as reported in April from The Australian via Benador Associates:

More than 400 young women and men in Iran have agreed to carry out suicide bomb attacks against US troops in Iraq and Israelis.

Spokesman Mohammed Ali Samadi said members of his group had already carried out suicide attacks inside Israel against Israeli military targets. Samadi said “a few” of his fighters had been killed in the attacks. His claims could not be independently confirmed.

The Iranian Government has distanced itself from the organization.

But yesterday’s ceremony was attended by Mahdi Rahimian, the head of the Martyr’s Foundation and the Imam Khomeini Relief Committee, both quasi-government organisations run by hardliners loyal to Iran’s Supreme Leader Ayatollah Ali Khamenei.

The volunteers agreed to one of three choices:

Jim Hoft
Jim Hoft is the founder and editor of The Gateway Pundit, one of the top conservative news outlets in America. Jim was awarded the Reed Irvine Accuracy in Media Award in 2013 and is the proud recipient of the Breitbart Award for Excellence in Online Journalism from the Americans for Prosperity Foundation in May 2016.
TRUMP CAMPAIGN Files Lawsuit to Overturn Fraudulent Election in Georgia
UPDATE: More on the Suitcase Vote Scam, the Elections Supervisor and that Strange "Pass" Between Mother and Daughter That Was Also Caught on Video
Just Stunning: Georgia Secretary of State Hired Dominion-Linked Firm to Conduct Audit of Dominion Voting Systems
Basement Biden to CNN: If Kamala and I Disagree on Principle - "I'll Develop Some Disease and Say I Have to Step Down" (VIDEO)
DISGUSTING! Georgia Elections Manager Gabriel Sterling Goes on Newsmax and Lashes Out AT REPUBLICANS -- DEFENDS THE SUITCASE FRAUD! (VIDEO)
See more...