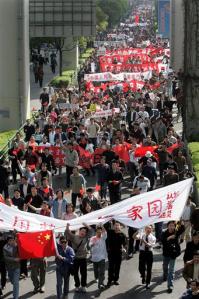 Protesters turned out in Shanghai to demonstrate against Japan in the second week of violent protests:

Thousands of people marched to the Japanese consulate in Shanghai and hurled rocks and bottles in a second weekend of anti-Japan rallies as China said relations with its neighbour were at a “crossroads”.

Onlookers estimated between 5,000 and 10,000 people marched along the main Yanan Road in a massive protest that stretched for about one kilometre (around half a mile), causing traffic chaos in the large commercial city.

At the consulate, riot police three-deep linked arms to prevent the rowdy crowd from entering the compound as they yelled: “Go in, Go in. Please let us in.”

A group of protesters hurled objects including rocks and bottles towards the building, although it was not immediately clear if they caused any damage, an AFP reporter witnessed. 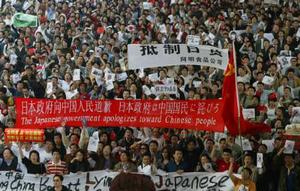 The Independent is reporting that Beijing has cracked down on anti-Japanese protesters in an apparent attempt to defuse a movement it fears could spiral out of control.

Many suspect last weekend’s protests were condoned by Beijing; TV pictures showed Chinese policemen looking on as the protesters rioted, and Japanese students who were beaten in Shanghai have said police officers ignored or cursed them as they were being chased through the streets.

“The demo was given a green light by the government but was much bigger than they expected,” said Tetsuro Kato, professor of politics at Tokyo’s Hitotsubashi university. “The energy from anti-Japanese demonstrations could be directed toward the government. The state can smash these demonstrations in big cities but if they spread outside they will be very difficult to control.”

Fearing the situation may escalate out of control, China is now warning its citizens not to protest:

China has warned its citizens against participating in anti-Japanese protests fearing they may spiral out of control.

Japan and the United States have issued urgent alerts for their citizens to be careful.

Meanwhile, in Japan the Chinese ambassador’s residence was vandalized this week:

A mailbox, doorplate and intercom at the official residence of the Chinese ambassador to Japan in Tokyo’s Minato Ward have been vandalized, police said Friday night.

The graffiti with red paint appears to be in response to growing tensions between the two countries, the police said, adding they are investigating the case.

The two countries have not seen this much tension since they normalized relations in 1972.

Update: Robert Mayer at Publius Pundit has a brilliant post on the China situation.