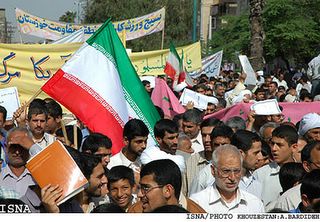 So, I saw this week that after from 6 to 60 individuals were reportedly killed in protests and uprisings in the southern Iranian city of Ahwaz last week, the government found the perfect solution to solve the situation. “Let’s have a peace rally!” Instead of freeing political prisoners like Esmaeil Mohammadi ,a father of five, or Hojjat Zamani, both who are sentenced to death, the mullahs decided on this big love-in as reported by Reuters:

Thousands of people marched for peace in southwest Iran on Friday one week after bloody ethnic unrest in which at least five people were killed and more than 300 arrested, state media reported.

Nothing like having a parade to get people to forget that their son was shot and their neighbor is still missing!