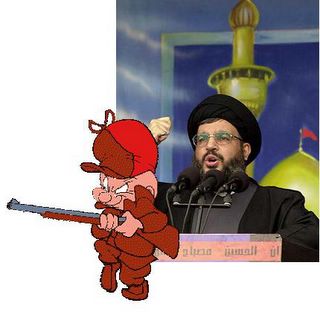 “Come Back Here You Wabbit!”

…It is time for Syria to fully implement United Nations Security Council Resolution 1559. That means the complete and immediate withdrawal of all Syrian military forces and all intelligence services from Lebanon.”

“The United Nations must recognize Hezbollah as a force to be reckoned with in implementing the U.N. resolution calling for the withdrawal of all Syrian forces from Lebanon and the disarmament of the country’s militias, Secretary-General Kofi Annan said Tuesday.”

But, the “Revelation of the Day” came from Matthew in Beruit:

I was watching the news last night, when Hezbollah’s chief (Nasrallah) held a press conference to discuss their plans for Tuesday’s rally and their general reaction to the situation. Since I only have infantile Arabic skills, I thought at first that he had a strange South Lebanon dialect. But the longer I listened, the more clear it became. The man can not pronounce the letter “r”.

The first time this showed up was in his pronunciation of the word “Syria”. The typical Lebanese pronunciation is “Sooria”. His version is “Soo-we-ah”. If it wasn’t for the translator, his speech would actually sounds like this:

So when you are watching this guy rant and rave on CNN about all the dramatic things Hezbollah will do, remember that the voice-over translation you are getting is hiding the fact that this man sounds like Elmer Fudd.