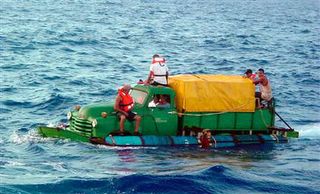 From Chrenkoff:
“A Cuban family that twice tried to reach Florida with vehicles converted into boats has made it to Miami, this time coming overland via Mexico from Costa Rica, the family’s lawyer said.

“They were held in custody in Brownsville, Texas until Sunday. They traveled to Miami on Monday after being released on parole for humanitarian reasons. They will be allowed to apply for permanent residence in 2006.”

Going Back Home
So, back to the drawing board and out with the sedan… better style, more comfort and a whole lot quicker! 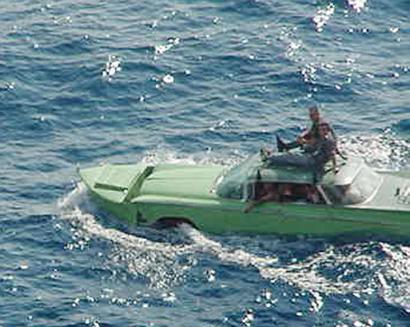 A sleeker design… but same result.

Apparently, these creations are the result of one Cuban mechanic who designs and works on floating cars:

Luis Grass had much to celebrate this New Year’s Eve: a new home, opportunities and a fresh start. The Cuban mechanic made headlines last year after converting two vintage American jalopies into floating, amphibious vessels in thwarted attempts to reach South Florida. After spending 10 months at the U.S. Naval Base in Guantanamo Bay, Grass, his wife, Isora, and their 5-year-old son Angel Luis were granted political asylum and relocated to San José, Costa Rica, last month.