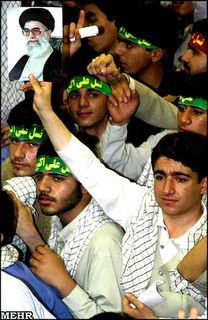 “The Enemies Have Plotted Against Iran’s Youth”

The “Supreme Leader” (No, not D. Ross) Ayatollah Seyyed Ali Khamenei addressed Iran’s youth at a rally in Tehran this week stressing the importance of participating in the upcoming elections:

He went on to say that the Iranian nation would have advanced greatly on the path toward development and spirituality if the Constitutional Movement of 1905 had not failed.

“The enemies, led by Britain, destroyed the Constitutional Movement by taking advantage of the Iranian nation’s inexperience and the clerics who led the movement. “They set Iran decades back by dominating the country, which was moving toward independence and freedom under Islam.”

“The fact that the Iranian nation has still not forgotten the slogan ‘Death to America’ 26 years after the victory of the revolution shows that the people are still vigilant. “The United States has always stood in the way of the progress and development of the Iranian nation.”

Do you suppose that they still chant, “Death to Jimmah!”? It’s hard to take this “supreme being” talk seriously, expecially with his closing statements:

Referring to the country’s progress in nuclear technology and the production of stem cells, Ayatollah Khamenei noted that despite this progress there is still a long way to go to build an ideal Islamic society based on social justice.

Wasn’t that nuclear progress because of this non-Iranian?