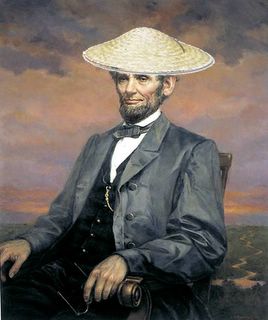 In a twisted way, China has invoked Lincoln, the great US President who preserved the union, in their internet chat rooms and even in Parliament. Of course this is because of the “run away” colony of Taiwan. Never mind that people fled there to get out of the communist mainland years ago when Mao came to power and never have expressed even a desire to belong to the communist mainland. Yet, the communists like to equate Lincoln and his calling to what they are calling their “run away colony” today:

As China’s parliament prepares to pass a bill aimed at barring Taiwan from independence, many on the mainland speak of a historical precedent rooted not in Mao or Marx, but in an unlikely hero-Abraham Lincoln. The US president who went to war in 1861 to prevent the southern states from splitting from the union has more admirers than one might expect in a Communist country that eschews Western-style democracy.

A comment in a chatroom of the Communist Party mouthpiece, the People’s Daily, read: “China opposes secessionism just like the U.S. opposed it during the north-south war.” Lincoln’s ideals of freedom, equality and democracy are somewhat conveniently dropped, or lost in translation.

“It seems to me that the parallels between the anti-secession law and the U.S. situation are badly misplaced,” June Dreyer, a political science professor at the University of Miami, said. In Taiwan’s case, Dreyer notes, it was never part of Communist China and has never expressed an interest in joining. “So, (it is) a very different situation … You can’t secede from something you aren’t part of,” she said.